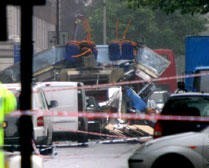 Ken has unveiled the Spirit of London bus today, a replacement for the number 30 which was destroyed in Tavistock Square in July.

The bus was named as a tribute to those who lost their lives in the attacks and will start running on its route from Marble Arch to Hackney later in October.

The bus is also, according to the BBC, "the first of a new generation of British-designed and built double deckers."

The other bombing-related story to appear in the past few days is the news that Time magazine has named tube driver Jeff Porter as one of their heroes of 2005.

After the attack on his train outside Edgeware Station on July 7, Porter calmly led more than 1,000 of his passengers to safety and has been praised by Time for his "quick thinking and classic British reserve."