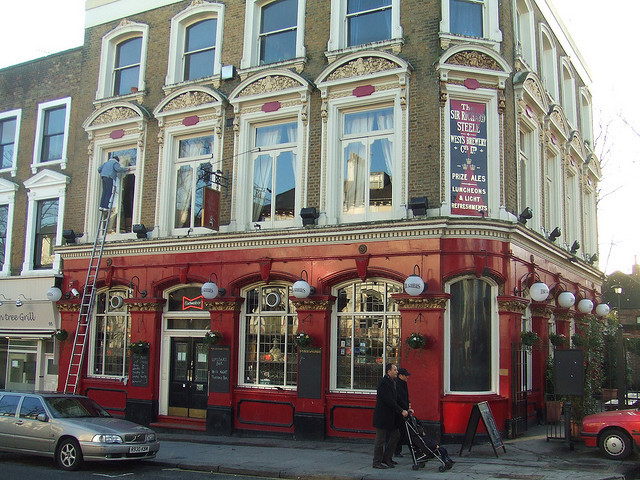 Unless you’re a student of 18th century publishing, you might not be aware of the fellow commemorated by this pub’s name. Steele was co-founder of The Spectator, and lived on the site of the pub in a quaint old cottage, immortalised in a famous print. Today, he's not only dedicatee of a fine pub, but has also gifted his name to the local area, increasingly known as Steeles Village (sans apostrophe, for some reason).

The pub is a riotously odd affair, with random signs, stuffed animals and sundry nic-nacs covering every inch of surface space, including the ceiling. What was once an ale-drinker's pub has gone a little up-market following a recent change of hands, and now sports a decent wine list. The popular old Thai cuisine has gone in favour of more generic British fare, but the pub remains otherwise unchanged since it was acquired by Faucet Inns.

Regular comedy (Saturday), music and quiz nights (Tuesday) fill the spacious upper bar. The small beer garden is welcome, if unremarkable, but stand on the right bench and you can just about see into Tim Burton and Helena Bonham Carter's garden. (Don’t tell the fuzz where you heard this, if you get done for snooping.)