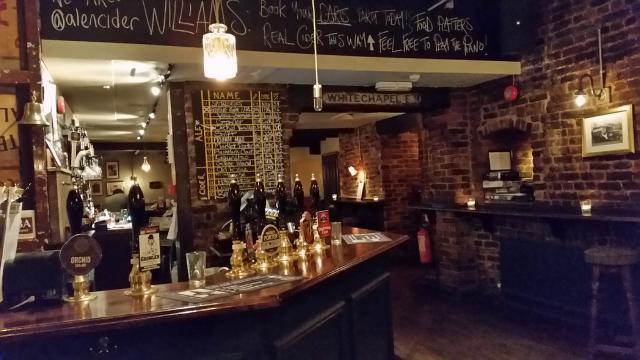 This beauty is tucked away down wee Artillery Lane, opposite the commuter hellhole that is Liverpool Street. All brick interiors and nooks, with walls decorated with old photos of the area and beer artwork, it's a lovely place to while away a few hours. We're told it can get busy after work but we've not yet found it so — though note it does close relatively early (9pm early in the week).

The place has its own spot in London's quirky history. It's named after Victorian landlord known for his draconian rules. Under its former guise as The Ship, the pub sported his list of regulations. These included no loud talking, and the curious bar on any customer being served more than once in a drinking session.

No such limitations today. Cider lovers should be as happy as ale fans; on our most recent visit, five of the beverages chalked up on the board were of the appley variety, plus 11 ales on tap. If you can't make up your mind, they'll do three third-pints for the price of a whole so you can take your tasting time. We haven't had chance to sample the food yet, but the choice of Ploughmans looks very enticing. As does the dartboard, but for different reasons.