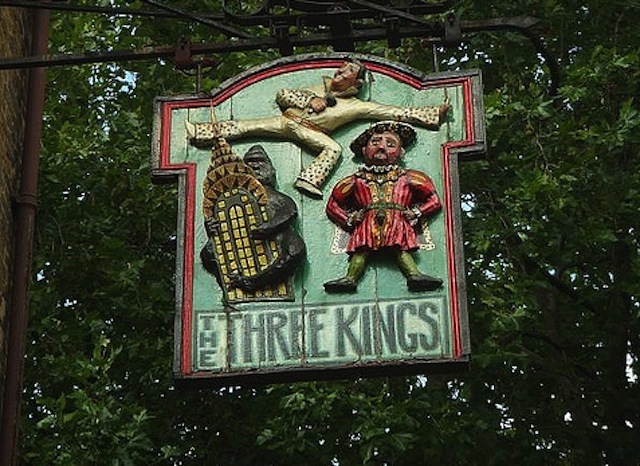 This pub has been voted by our readers as one of the best in Clerkenwell. See the full list of winners here.

An old favourite in the area, the Three Kings has a more raffish vibe than the ever-bulging Crown Tavern almost opposite.

The pub's hanging sign was a local landmark, a trio of Kings comprising Elvis, Henry VIII and King Kong. In real life, the three never met, yet were harmoniously grouped in said sign. Alas, it went missing a few years ago. It briefly returned, but seems to have vanished again. Elvis (with Henry and King) has left the building.

The inside remains as eccentric as ever. The walls are lined with pretty much EVERYTHING that ever existed. They even have a rhino's head. If you work for a company that makes jigsaws, and you're looking for a visually busy setting for your next puzzle, this would be a superb place to consider.

Those in the know shuffle upstairs for perhaps London's most famous jukebox, which plays classic 45s from decades ago, ones that only those with a long-service award in the music business have ever heard of. In the summer, it's fun to stand next to it, nodding along to the tunes and dangling precariously out of the window.

The beer choice, once commendable, is now simply run-of-the-mill, but you're not going to be served a bad pint, and there's plenty of choice by the bottle.

Back to all Pubs Back to Clerkenwell
Click for Comments