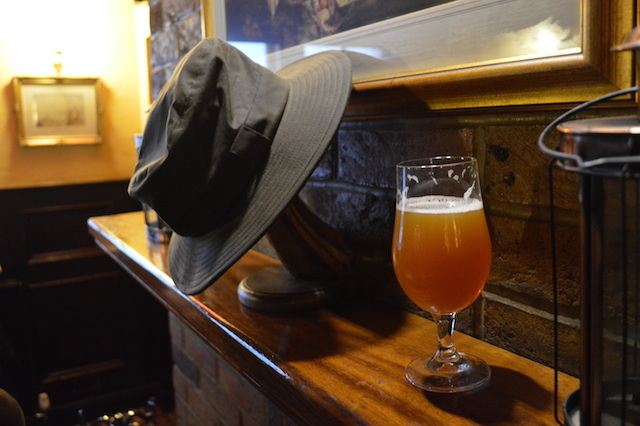 One of the most important beer pubs in London is barely in London at all. Carshalton used to be Surrey, but now lies within the Borough of Sutton. Surrey's loss is the capital's gain, for this is a true treasure house for real ale fans.

The Hope wins some kind of CAMRA award every year. As soon as you reach the bar, it's obvious why. Here's how they describe it:

With 7 Ale pumps (usually including Windsor & Eton, Knight of the Garter, Downton New Forest Ale, a Dark, a Strong and a Hoppy beer and usually served in lined pint and half glasses), 3 Real Ciders, 3 KeyKeg fonts with craft beers (we also sell beer in thirds) and a wide choice of foreign beers you won't be lacking choice when you reach the bar.

The choice was even wider on our visit, with a small beer festival taking place in the back yard.

The Hope's story is as warming as a seat by their open fire. The place almost closed down in 2010, but a group of regular customers lobbied hard and eventually bought out the lease. It's literally ran by beer drinkers, for beer drinkers. The clientele is a mix of that local fanbase, and those who've travelled from afar from regions where the pub's fame precedes it. For the record, we sampled Bingham's woodsmoke porter, a Cannonball from Magic Rock Brewing and a Belgian coffee brown ale from Brodie's.

Back to all Pubs Back to Sutton (Borough)
Click for Comments