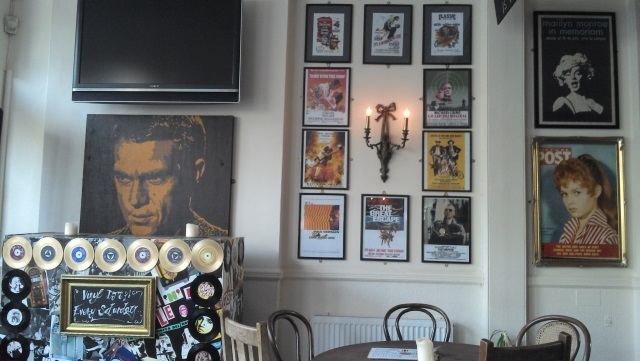 In a tremendous victory for tipplers across N1 and beyond, The Alma was saved from rapacious developers at the end of 2013, by being awarded Asset of Community Value status by Islington Council. It cannot now be sold on for non-pub use without the say so of the local community, and any residents wavering in their opinion would need no more convincing than a 60-second tour around this fine pub.

In keeping with others in the area, it has a distinct theme — in the Alma's case, it's movies. There are movie posters plastered across every wall, all manner of memorabilia, a large cardboard cutout of Humphrey Bogart, a life-size cowboy, cartoon covers and everything else you could think of in a gigantic tribute to the entertainment industry. It is clearly kept up to date as well — a collection of posters slapped on the same board includes one from 2013's Mandela, blending in easily alongside old movies such as Brief Encounter and The Third Man.

Its primary purpose, however, is to quench thirst. It has a handful of ales on tap, a quality wine selection (and a wine club), and an interesting cocktail selection (including one named after the actor Hugo Speer). There is a gastropub-style menu as befits the area, and we're told they do a good line in Sunday roasts. There's also a small beer garden, or rather beer yard. Oh, and a piano.

During our visit, there was a small boy, possibly 12 years old, with his mother, nodding his head slowly along to a John Lee Hooker tune rolling from the speakers. We can't promise he'll be there on your visit but it was a nice sign that this is a friendly pub that very much deserved to be saved from the wolves.