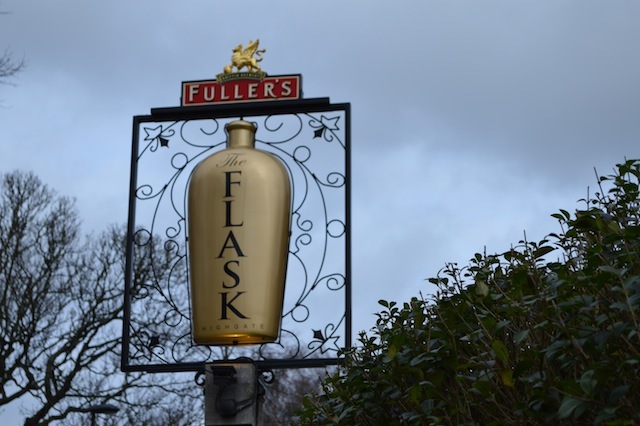 Ah, the famous old Flask. If you've just slogged it up the hill from Hampstead Heath, there are few more-welcome sights. This is a champion pub whatever the weather.

In the summertime, sit outside in the sizeable seating area, some of it covered and heated. For winter drinkers, the cosy interior boasts two real fires. A series of rooms, each progressively lower, reminds us of a ship, with the bar on the poop, and the dingy cellar area down amidships.

The bar usually has five beers on tap, drawn from the Fuller's range, with a couple of guests. The food is reasonably priced for these well-to-do parts, with a mostly British menu.

Did you feel that sudden drop in temperature? The Flask is said to be haunted by a female phantom, who is rarely seen but often heard. Even more ridiculous, the nearby Pond Square is supposedly haunted by a ghostly chicken.

One peculiar tale that even the bar staff won't know about: in 1736 a 64 year old man, accompanied by a hairdresser, ran from the Bull's Head in St Giles to The Flask in just 45 minutes, "To the Surprize of every Body who was present" (Derby Mercury). It's at least four miles, and mostly uphill.

Some interior shots taken from the Google Street View tour... mostly because this place is always so rammed, we can't get any good photos inside.