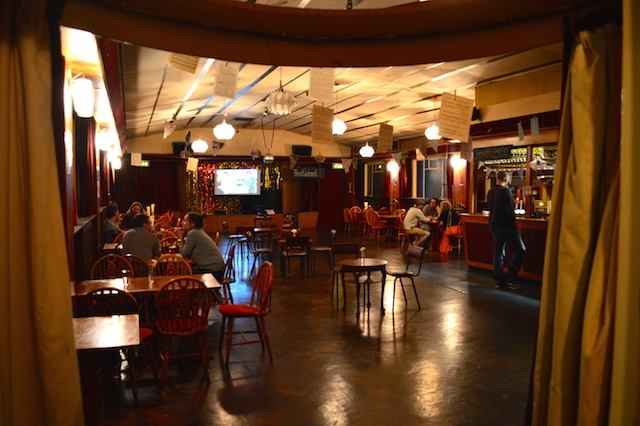 The Effra Social, not to be confused with the nearby Effra Hall Tavern, arrived on the scene too late for our 'best pub in Brixton' poll. But the building has been around since Victorian times as a former Conservative club. It's said that Churchill occasionally drank here, plus John Major and Iain Duncan Smith. The Antic pub company, who also own the nearby Dogstar, are up to their usual antics, leaving the fabric of the building intact and tatty, imbuing the space with plenty of natural charm.

The large drinking hall can get busy at weekends (with queues, even), but also offers a relaxing, dimly lit experience midweek. You'll just have to chuckle at the small stage area. Decked out with silver ribbons, it looks like something off of Phoenix Nights, or perhaps some end of the pier show. While not huge, the beer choice is at least novel, with three or four lesser-spotted ales on tap — including ales from Brixton Brewery on draught. This is as much an event space as a pub, and you'll find regular DJ nights, reggae sets, dances, quizzes and film clubs. This former Conservative social club has kept the social and lost the conservative.

Read an interview with the assistant manager on Brixton Blog.