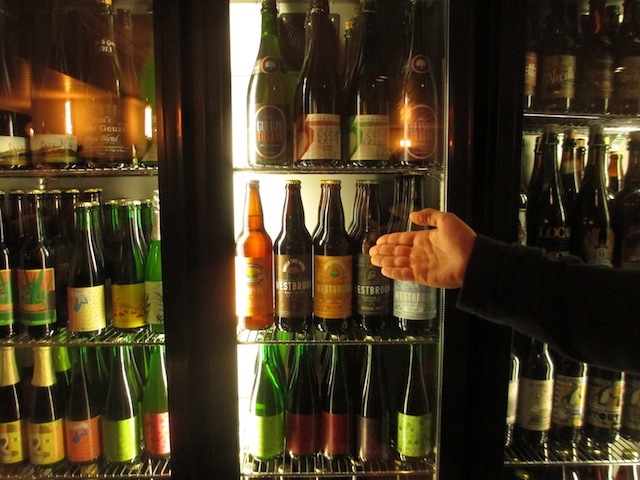 A few years back, CASK was overwhelmingly voted the best pub in the area by discerning Londonist readers. From the outside, you'd never guess the treasures that lurk within. An unassuming frontage is almost crushed beneath the vast red-brick Lillington Gardens estate. Inside, too, you're not immediately struck with wonder by the relatively spartan, decidedly not-cosy furnishings. But head to the bar and, oh my!

CASK was an early pioneer in the recent resurgence of craft beer, opening in 2009. Sister pubs, trading under the name of Craft Beer Co, have since opened in Brixton, Covent Garden, Farringdon and Clapham. All have a jaw-dropping selection of beers, on draught, keg and bottled.

Ten hand pumps serve beer from British microbreweries. Now, we drink a lot of beer, and hadn't encountered any of these tipples before. And then there are 15 craft keg taps to tackle. A set of beer fridges next to the bar compound the decision dilemma. One of our number forked out £13 for a cherry beer, which packed such a punch it was like being hit over the head with a fruit machine. If you're not sure where to start, the staff are very friendly and can coach you through this important decision.

While beer is king, other options are available. The pub claims "a selection of spirits, wines and champagnes which outshines most 5 star hotels". Food choices include well-respected burgers and pricey but hearty Sunday lunches. Head along on a Sunday (4.30-7.30pm) for live folk music.