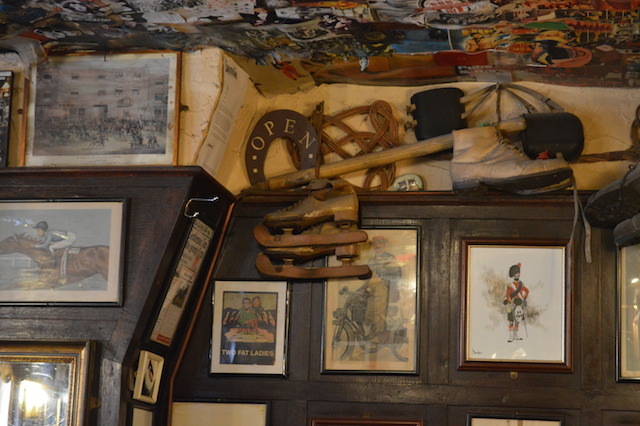 Prepare to be admonished. This notoriously fussy pub won't tolerate mobile phones, customers sitting at tables that are too large for their group, or curious snoopsters taking a peek down the adjacent private mews. (All three drew a comment on our most recent visit... and we were only there for 45 minutes.) We'd half expect a moany email telling us to take these surreptitiously taken photos down, only we suspect the bar staff have never heard of the internet.

So, if you're sensitive to that 'we do things our way' attitude, then avoid at all costs. If, however, you quite like to see a bit of character then the Nag's Head has plenty going for it. The crooked wooden interior is split onto two levels, with one bar serving both. The staff have been known to leap over the lower bar, which contains no flaps.

Publican Kevin Moran (not the Republic of Ireland footballer) is the latest in a short line of landlords — the place only had five between the mid-Victorian period and 1950. Look out for the pump handles — they're over 150 years old and made from Chelsea pottery.

The pub is decorated all around with other unlikely baubles, such as vintage one-arm bandits and a pair of Edwardian ice skates. Despite its fierce independence, it only dispenses ho-hum Adnams brews. Odd. We haven't tried the food, but reviews on other sites do not paint the most nourishing of pictures. This is a pub in which you will go through all the emotions.