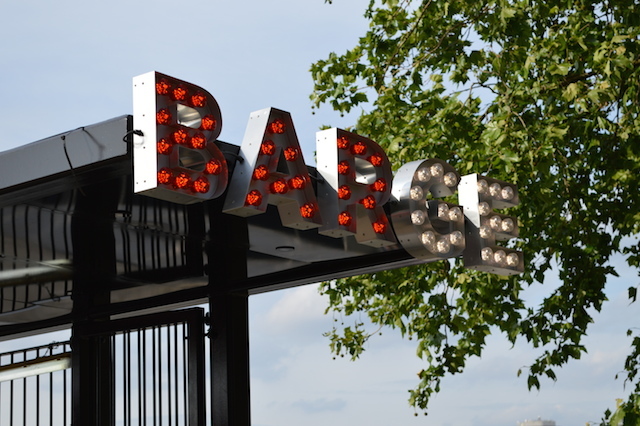 Battersea Barge might just be the hardest-to-find pub in the whole of London. It's half way down Nine Elms Lane, currently one of the Kingdom's largest building sites. You then have to turn down an unmarked private path towards the Thames. And there it is, bobbing up and down behind the Richard Rogers Riverlight blocks.

It's worth the trek. Drinking and boats were made for each other. Any of central London's floating pubs (including sister ship Tamesis Dock in Lambeth) gets full to capacity at the merest hint of sunshine. Not so Battersea Barge, whose obscure location keeps numbers down. Perch outside on the front deck, retreat within the sheltered upper section, or get eye-level with a coot down in the spacious lower deck.

It's a capacious vessel. Dutch-built in the 1930s, it was requisitioned by the Nazis to transport tanks around Europe. It came to Britain (minus weapons of war) in 1970s, and has graced the Nine Elms shore since the mid-80s.

The bar's not the best-stocked in the world (floating bars never are), but you'll find three or four chilled kegs, and they have some BrewDog in the fridge. You'll find the place open most nights of the week, but check the website or phone in advance as it regularly gets hired out to private parties.

Visit now. In five years time, Nine Elms will be a very different place and the Barge will be as bustling as any central London pub-boat.