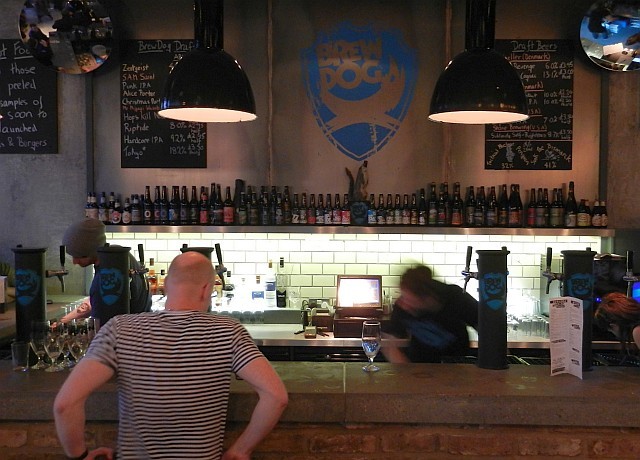 This pub was selected for inclusion by the Londonist team as part of the London Beer Quest Series.

BrewDog, for the uninitiated, is an independent Scottish brewer of rather bold craft beer. It’s probably fair to say that it has actively courted controversy – on-off arguments with the Portland Group and CAMRA alike, along with a distinctive penchant for brewing fiercely strong beers, have regularly kept it in the drinks industry headlines. The brewery even drove a tank around Camden Town to promote the opening of this bar.

The modestly-sized bar features gunmetal grey walls and ceiling, paired with brick, wood and large windows, providing a pleasant contemporary décor. It's always been busy on our visits, with a youngish crowd of Camdenites and beer geeks even in the middle of the afternoon. There's further seating downstairs, to ease things a little.

Ten of BrewDog’s own draught brews are supplemented by half a dozen US and European imports from the likes of Mikkeller and Stone Brewing. This is not a bar for the weak-of-liver or shallow-of-wallet, as the vast majority of beers boast high (or stratospheric) levels of alcohol, usually with price tags to match. Two of BrewDog’s more headline-grabbing beers, Tactical Nuclear Penguin and Sink the Bismark, are offered in 25ml measures – oddly sensible considering their spirit-like ABV. Flavours are strongly hop-focussed, with a considerable variety of pale ales on offer, alongside various porters and stouts. Those with a gluten intolerance (see our guide) can join the fun with Vagabond pale ale.

Despite the bar’s busyness, the staff are happy to help those who are unsure what to order. Food offerings are slanted towards hearty snacking, such as pizzas and cheese and meat platters.