Former tollgates in London are plentiful. It won't cost you a penny to pass them these days (the Congestion Charge is a different matter entirely) — except for one. London's last functioning tollgate is in Dulwich. It's been in operation on-and-off since 1789, and drivers are still charged £1.20 to drive through it. We chose to walk it though... we're cheap like that.

The toll road is a 1.5km stretch of private road otherwise known as College Road, running from the South Circular to the junction with Fountain Drive. The tollbooth sits roughly in the middle of that stretch.

We're starting our tour at the north end, where the first clue that this isn't your run-of-the-mill thoroughfare is the road sign, reading "Private Road" instead of "College Road".  Oh, and this:

That's (part of) the impressive Dulwich College which gives the road its name.

The whole road is heavily laced with these yellow parking signs — presumably as it's privately owned, regular parking restrictions don't apply, so the landowners have to take matters into their own hands.

There's little else of note, except for a miniature roundabout and a couple of allotments, until we reach the main attraction, the tollgate itself. It's more of a booth really, clad in white wood (so far, so Dulwich — there's even a weather vane on the slate tiled roof) and sitting in the centre of the road. Quaint it may be, but there's no doubt this is a 21st century tollgate, taking cash, contactless card, chip and pin, and Apple Pay.

Confusingly, the adjacent Tollgate Drive isn't tolled — it's only this stretch of College Road to which the fee applies. In the garden of what used to be 'Tollgate Cottage', a well-kept notice board gives the former prices (see top image). Here's a closer look at some of those prices:

Something to bear in mind next time you take your hog or mule out for an airing.

The chap in the booth isn't too animated — he's not allowed to give change, and is only there to deal with problems, of which we witnessed none — but we think we've found London's fiercest golden retriever. The pricing sign sits in his garden, and he's not too happy at having it photographed.

Having done a whole half a mile of sightseeing, we're ready for a rest (there may be something in this driving malarkey, even when you do have to pay), so we loiter for a few minutes to find out who exactly uses the tollgate. In a 10 minute period just after 9am on a weekday, about 12 vehicles go through. Most seem to have permits — no faffing about with coins. Two others cars engage in three-point turns to avoid paying the toll. Presumably they're tourists to the area, unwilling to be parted with £1.20 on a whim.

Continuing along the road after the tollgate, we find ourselves on a gradual uphill incline. As roads go, it's unremarkable, at least by Dulwich standards. As is the way around these parts, it's wide, lined with white posts with black link chains, and has houses the like of which we'll never have the fortune to live in. We imagine it'd be leafy in the summer, but it's reassuring to know that on a cold Tuesday in January, it's just as bleak as the rest of London.

It's also home to the most eloquently worded dog business sign we think we've ever seen:

That's not to say that the road doesn't have its sights worth seeing. Just around another bend, in almost cruel proximity (we like our excitement spread out, ok?), are its two main attractions; Sydenham Hill station and its neighbour, St Stephen's Church.

The station itself is unremarkable, but it does offer a sight almost unheard of in London; a car park with some empty spaces. Stragglers appear from various locations, dashing towards the station. A train must be due.

The church, a quintessential English brown stone church with an impressive spire, seems to have taken influence from the Vicar of Dibley: 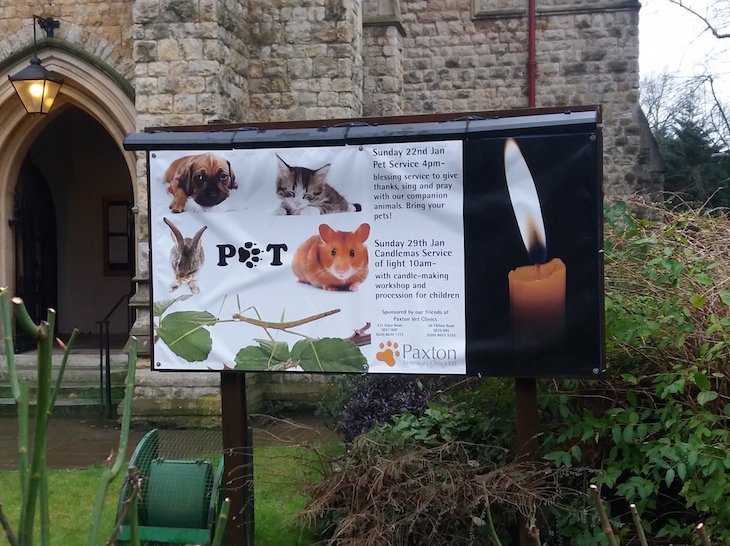 By this point, the only signs that we're still in London are the Oyster card signs at Sydenham Hill station and the incessant chattering of the capital's resident parakeets. The Green Chain Walk passes nearby, and although it doesn't touch the toll road itself, those identifiable green signs are on hand to guide Lycra-clad walkers arriving by train to their starting point.

We're on the final stretch of the road now, although the toll charge obviously doesn't keep out the riff raff — a raucous chorus of tooting erupts from a wronged motorist.

As we understand it, the charge runs to this unremarkable junction where College Road meets Fountain Drive. South of this point, drive up and down as much as you like without paying a penny.

Signs warning of the toll charge start about 100m further along the road, giving those who wish to avoid it ample time to turn around. The larger, whiter '20' in the £1.20 price suggest to us that the price has been changed recently — no doubt upwards, as is the way of these things — and the signs adjusted accordingly.

Well, we've reached the end of the toll road. We've not quite managed to make a day of it. We've barely made a morning of it to be honest — mental note to pack a picnic next time. The only thing left for us to do is wander back from whence we came, ensuring we've left no stone unturned on London's only remaining toll road.

It's only once we've crossed the South Circular back onto regular territory and turn for one last look down the road that we see the best sight the costly thoroughfare has to offer. Crystal Palace, looming over the road, only just emerging through the mist, having been completely absent from the skyline when we started our explorations an hour previously.

Thinking of going for a drive down College Road? Everything you need to know about the toll charge is here.