The first medium-resolution images of Pluto have reached Earth from the New Horizons space probe. The pictures have surprised space scientists. Pluto is revealed as a pinkish-orange orb with dark curvy patches, unlike anything else in the solar system.

The residents of Mill Hill in north London have known this for years. An underpass beneath the A1 depicts the main bodies of the solar system, including tiny Pluto. Here's the Mill Hill portrait, beside the most recent NASA image: 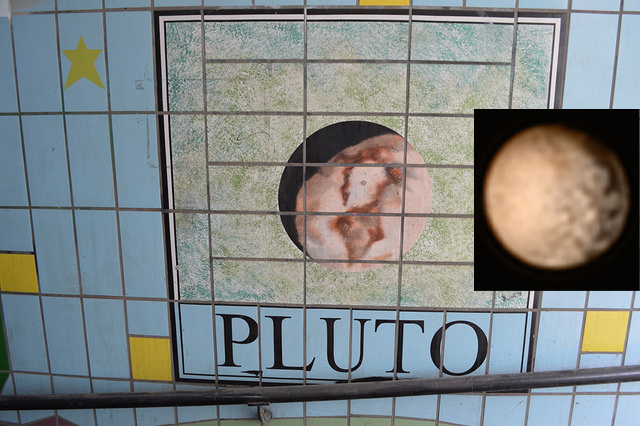 The artists, ‘S Burnett’ and ‘J Deardey’, were pretty accurate on the colour. Meanwhile, the prominent and curving ridges are also present and correct. To be clear, the subway tiles were painted in the mid-1990s, when images of Pluto were little better than an unresolved dot.

Scientists have long speculated that Pluto might have a reddish hue from the action of UV rays on methane, and it looks like that idea was incorporated into the tunnel mural in the 1990s. No one knew for sure, however. It's certainly gratifying to see the speculations of a north London underpass borne out by a camera that's 8 billion miles from Earth.

Higher resolution pictures of Pluto will be released in the next few days as New Horizons zooms past the dwarf planet. We'll be looking to see if other rotations provide an even closer match.

The subway is next to the University of London Observatory. Although primarily a teaching observatory, its astronomers have made several discoveries regarding exoplanets and supernovae.

In another cosmic association, Mill Hill was also the birthplace of Doctor Who actor Patrick Troughton.