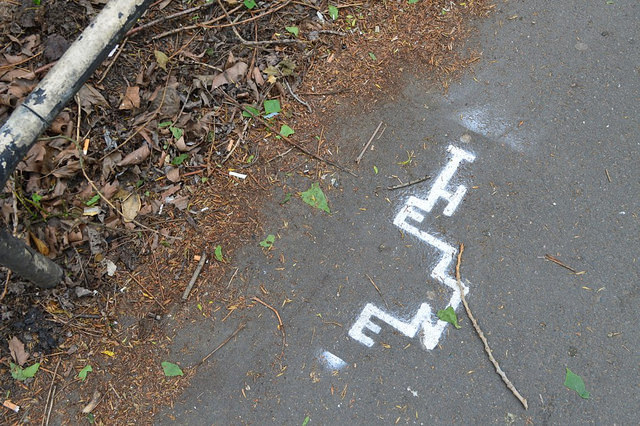 Continuing our series of ambles around Greater London. This week, we follow a new arts trail that connects little-known parts of the River Lea to North Greenwich and the Royal Docks.

The Line opened in the middle of May, offering three short, connected walks through an aquatic cityscape in east London. The route is peppered with curious works of art, many by household-name artists. We thoroughly enjoyed the experience, though it's not without frustrations.

The first obstacle to overcome is the signage. On emerging from North Greenwich tube, the walker is confronted with few clues about how to reach the start of the trail. Basically, track clockwise around the O2, heading towards the towers of Canary Wharf. Ignore the off-putting 'no unauthorised persons' signs from Balfour Beatty. 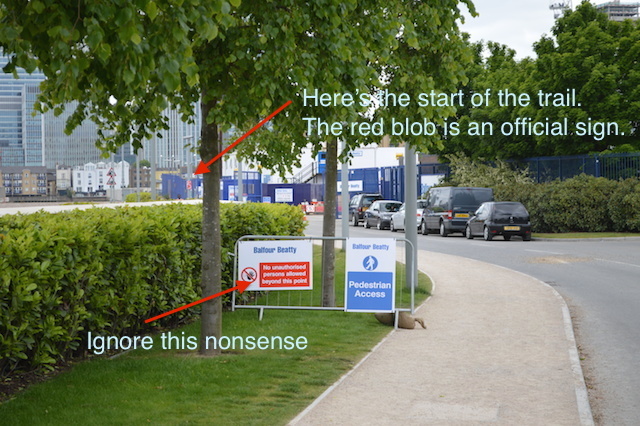 It might have got better since we tried it on the opening weekend. Once you've finally made it to the Thames Path, the route is obvious. Simply carry on clockwise round the Dome, keeping the Thames on your left. Be careful not to miss the first piece of artwork. It looks a little something like this: 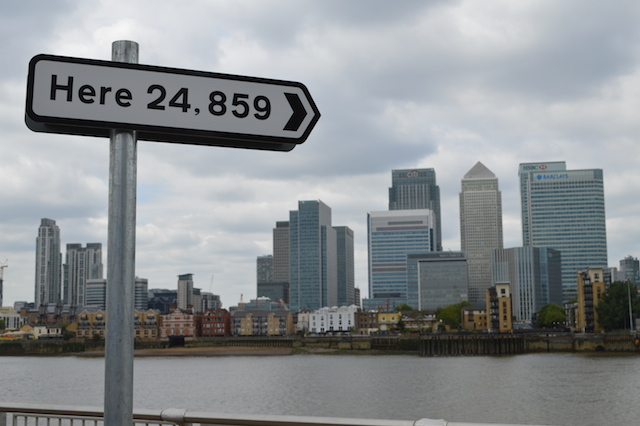 It took two people (Thomson and Craighead) to come up with that. But it's more subtle than it first appears. The number refers to the distance you'd need to travel around the world to find yourself back 'here'. And as the sign stands more-or-less on the Prime Meridian, it's doubly apposite. "But what are the units?", grumbled our walking companion.

The remaining pieces of art on this stretch are old-timers. Richard Wilson's cross-section through a ship, and Antony Gormley's Quantum Cloud will be familiar to anyone who's walked the Thames Path in the past decade, but are both worth seeking out if you've never been here before. When you're done, hop on the cable car over to the Royal Docks (we actually had to queue for 10 minutes).

This next section of The Line requires a couple of switchbacks. The first piece of art sits outside The Crystal, a coffin-shaped thing by Sterling Ruby. We emitted a non-committal 'meh', and turned to move on. We looked at the work with adult eyes, however. A few seconds later, the sculpture was covered in giggling children, who found it just the right height for a clamber. Art is truly in the eye of the beholder. 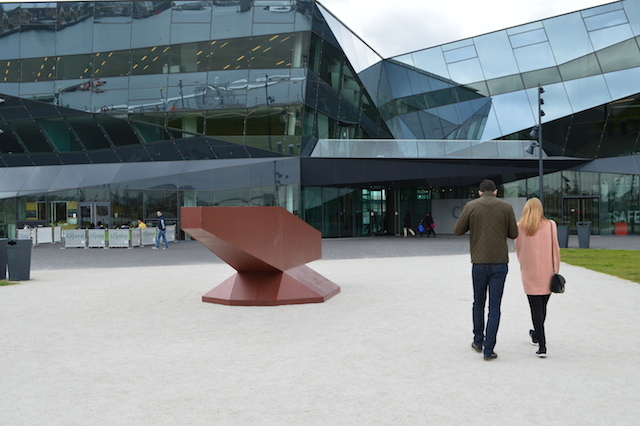 That couple, by the way, were also walking The Line. We encountered dozens of people out on the trail. The opening weekend marketing had clearly been a success. We're not sure if it's meant to be part of the artiness, but the people behind the project have made it fiendishly difficult to find your way around. The artwork is poorly signposted and the website is laughably unusable, with a silly map and little info about sculptures. It wouldn't even load on our iPhone, so we had to use Diamond Geezer's much-better guide. That said, getting lost is often the best way to remember an area. The Line builds in just the right amount of navigational confusion to make us nonplussed but not anxious.

The Royal Docks contain two other pieces (a third, we're told, still awaits planning permission). Martin Creed provides a stack of girders, guaranteed to set your pulse dawdling. Much more impressive is the towering figure of Vulcan, one of the last works of Eduardo Paolozzi (he of the Tottenham Court Road murals and the British Library's Newton sculpture). 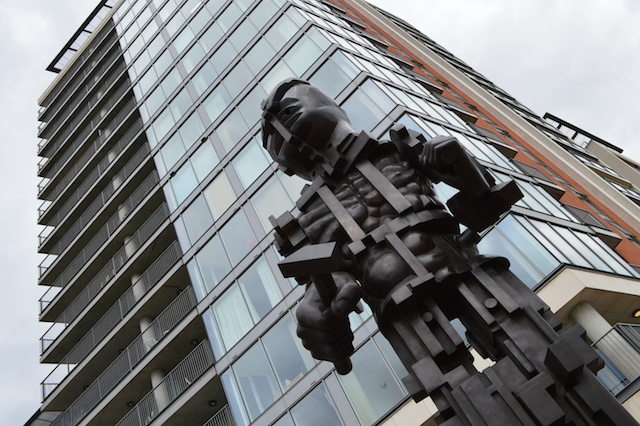 Now that's more like it. Vulcan ticked off, you should double-back past the cable car and head to nearby Royal Victoria DLR. Catch the westbound service and alight at a station you've probably never used before: Star Lane. We're in a land of light industrial units, an area you wouldn't expect much footfall at the weekend. Only now there's a sexy new art trail running through this commercial estate, and at least a dozen people (including the couple pictured below) alight with us.

The trail is better signposted in this section, and we have no trouble following the route to Cody Dock. 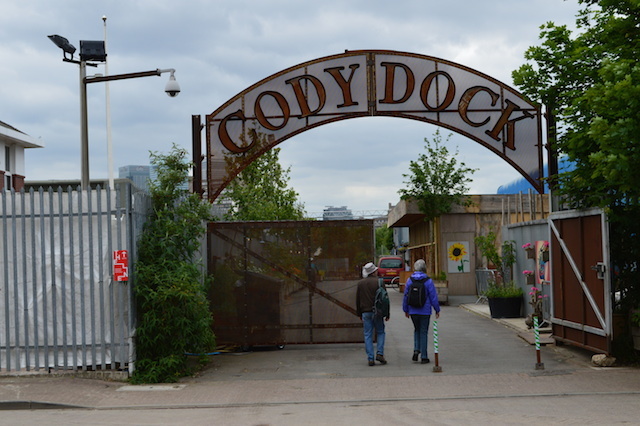 Formerly part of a gas and chemical works, the dock has been transformed into a community space with planters, picnic spaces, a gallery and this rather special cafe. 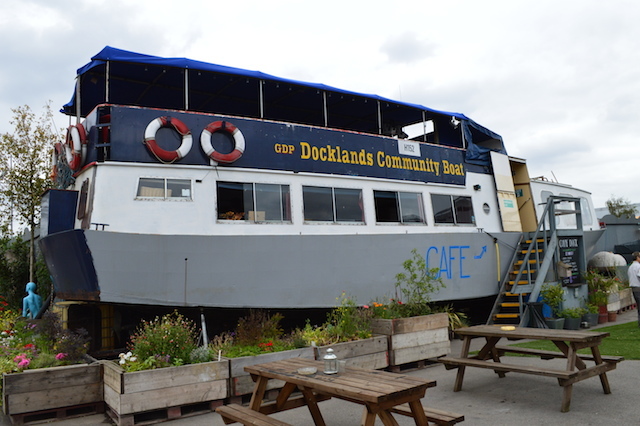 The poor guy behind the counter seemed worked off his feet. This was the first weekend of The Line, and it looked like he'd been surprised at just how much trade his hidden boat-cafe was getting. We stopped for a cuppa, then examined the art nearby. Damien Hirst contributed one of his anatomical sculptures to The Line and here it is, in all its epidermal glory: 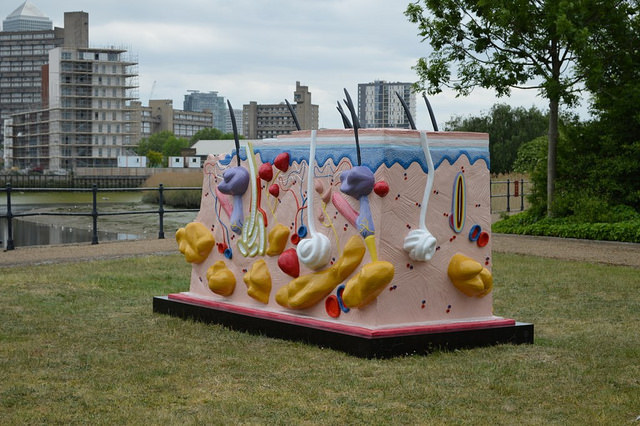 Just as impressive, but not part of official art trail, is the stellar goddess made from old tyres. She guards a closed section of river footpath that should be open soon: 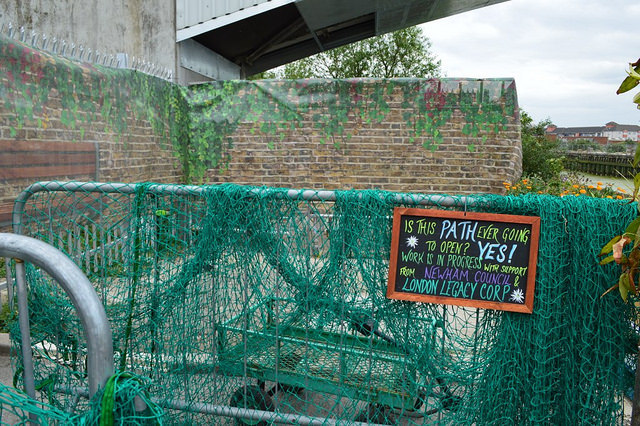 Cody Dock is one of those marvellous hidden pockets of London, a delight for the curious London explorer. It is perhaps the section of The Line that will stay with you the longest. But we must move on. Follow the footpath north along the River Lea. The river is filthy here, stained with petrochemicals and sewage outfall. London's deepest tunnel, the Lee Tunnel sewer, should fix that soon. 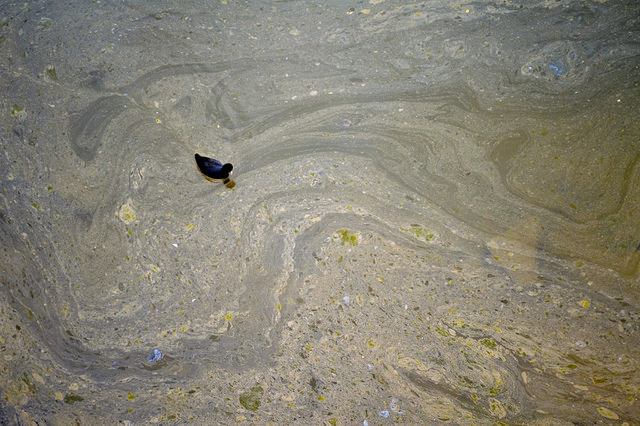 Better things await along the towpath; the next piece of art is remarkable. Abigail Fallis has built a DNA double helix from shopping trollies. The blurb makes some dubious asservations about commercialism finding its way into our genomes, but that doesn't detract from the power of the sculpture.

The trail eventually peters out at Bow Locks, forcing the walker on a looping detour (see map). The Line hopes to open up a more direct route underneath the Twelvetrees bridge. Before you do the detour, here's another one for you. Head east along Twelvetrees Crescent to the small park next to the gas holders. Here you'll find a working gas lamp and a memorial to gas workers who fell in the Great War. Until recently, a gas museum could be found round the corner.

Back on track, and you'll soon reach the wonderful Three Mills complex. This is worth exploring in its own right, a set of tidal mills built in Georgian times. A piece of The Line artwork, a video installation by Bill Viola, can be found inside. The final stretch of walk leads past Thomas J Price's oversized sculpture of a bloke fiddling with his phone — a true symbol of the modern age that will fascinate Londoners 100 years from now. 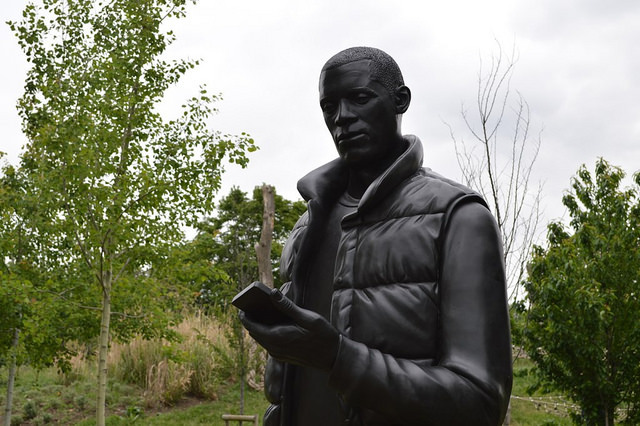 From here, it's a 10 minute walk to either the new Pudding Mill Lane station, or else Stratford High Street. It will take a lot longer to get Johnny Cash's I Walk The Line out of your head.