By Laura Reynolds Last edited 90 months ago
Laura Reynolds Teeny Houses At Vauxhall Park Model Village
Rumours abound that a model village exists in Vauxhall Park, yet very little is known about it. In fact, calling it a village is a bit of a stretch - hamlet would be a better term for managing expectations, we think.

Six houses, each 2ft high, and three smaller outbuildings, sit amongst flower beds in an area no bigger then 10 metres by 10 metres. All houses are mock tudor, white with black beams and occasional elements of orange brick, except one, set on its own, which is more predominantly orange. There's no obvious explanation for this one straying from the default — perhaps it's the village pub?

Despite the close quarters of the houses, the areas feels more like a smattering of individual houses that happen to have bumped into each other than a village. They're all identical — except the orange one — but beyond this, there's little to tie them together except a concrete path. They look good for their age (they were made in 1949 and restored in 2001) but something about them put us in mind of the animated French village in Disney's Beauty and the Beast.


The houses are brutalist, not in the way that Barbican is brutalist, but brutal in the sense that the houses lack the delicacy or intricacy that one expects from a model village. The colours are harsh, the red roofs particularly shiny.

If you're looking for somewhere to play giants, this is not the place for you. Concrete paths between the houses exist as if the area was once explorable, but access is now prohibited by railings on one side and flora on the other. The odd rogue squirrel, uninhibited by human boundaries, breaks through, but other than that, interaction with the model houses is out of the question, for their own protection, no doubt.

Their position, overshadowed by all manner of trees, makes you feel as though you've discovered something special and secret. Despite being on the main footpath through the park, there are plenty of other things to distract your attention as you round the corner — a fountain and the children's park being top of the list — so it wouldn't be difficult to cross the park without noticing these modest dwellings amongst the flowers at all. 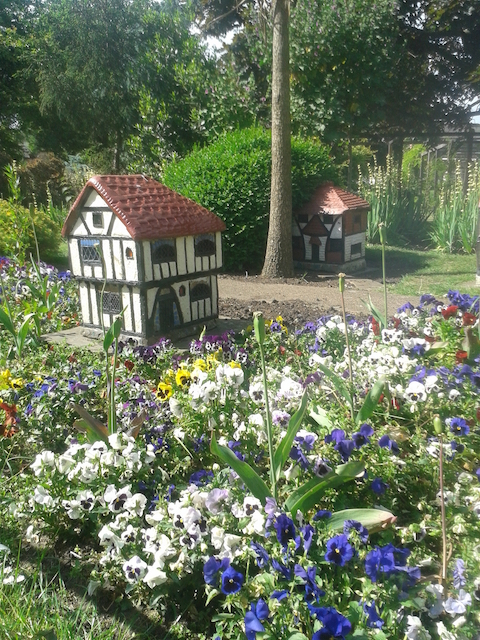 Overlooked by the shininess of the St George Wharf Tower and a couple of other high rise blocks of flats, with South West trains crammed full of suburban commuters whizzing past on viaducts in the middle distance, it does make you think; if these six humble abodes went on the market, they may well be the only affordable houses left in zone 1.

In terms of visiting, Vauxhall Model Village is best left as a nice surprise that you could stumble across if you happen to find yourself in the area, rather than something to set out to explore. If you do find yourself in Vauxhall Park on a sunny day, the human sundial just a few metres away in the Lavender Garden is worth a visit. Stand on the stone in the middle, and the sun and your shadow will join forces to tell you the time. Alas, it was as grey as a badger on the day we visited, but the girl on the poster at the entrance to the park seemed to be having a whale of a time.

Vauxhall Model Village is free to visit and is open during the hours that the park is open.