By Londonist Last edited 94 months ago
Londonist London's LGBT And Alternative Scenes Are Fighting Gentrification
This year’s LGBT History Month has had some hugely positive moments. The #FreedomToKiss campaign, organised by Pride in London, took over both Twitter and Piccadilly Circus under the watchful eye of the statue of Eros; while the British Museum tweeted the busts of Emperor Hadrian and his lover Antinous side by side with the hashtag #ValentinesDay. 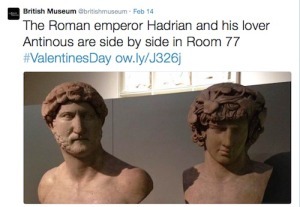 But there's a creeping threat that dogs queer venues across London. And it's not just a problem affecting the LGBT+ community — the cabaret, music and alternative scenes are also under threat.

Bits of old Soho are being lost to luxury flats — lesbian venue Candy Soho is no more and Charing Cross Road’s Manbar shut recently after noise complaints. In Vauxhall, the club Area also closed while the Royal Vauxhall Tavern, South London’s oldest queer and cabaret venue, has been sold to new owners with its future now uncertain — there's talk of a ‘wine bar’ taking over the upper floor.

Some people feel the closure of such bars and clubs means there's also a loss of the sense of community and safety that queer individuals look for, especially the young and nervous who are newly out of the closet and looking for safe spaces and acceptance. Although London is becoming an increasingly accepting city, the past year has seen a spike in reports of homophobic attacks, even in Vauxhall.

Community has always been at the centre of the queer scene and where validation and safety is provided, culture is developed and acceptance can be found, especially for those who haven’t received that acceptance from family and friends.

But it's not all doom and gloom — savvy venues are adapting and thriving. The XXL club in Southwark is still a popular venue for gay men and so is The Hoist in Vauxhall, a venue which opened in 1996 for men into leather, uniform, rubber and industrial gear. Guy Irwin, owner of The Hoist, acknowledges there has been gentrification, but says adaptation and evolution are the main reasons that his venue is successful. “London evolves — the scene changes — and property prices change areas… Clubs based on poor business models have failed.”

Clever use of social media is another key part of the evolution, especially as more gay people turn to connecting with each other online and through apps. When asked about these and what queer venues must do to avoid shutting down, Irwin retorts: “Wake up and smell the coffee.” He says the introduction of more inclusive events to The Hoist’s programming (such as the Royal Vauxhall Tavern’s Klub Fukk) is another part of that adaptation. “The future is mixed... staying with a 1996 model of working is no longer acceptable… nor will it work!”

But gentrification isn't just a problem for the LGBT+ community. The shutting down of Madame Jojo’s in 2014 saw the queer and cabaret communities up in arms. A protest march with a coffin at its centre took place in November. One of the pallbearers was award-winning cabaret compère Benjamin Louche who said: “It's extraordinarily short-sighted to think that decimating cultural centres in pursuit of quick profits won't come back and bite you.” He believes cultural significance is not defined by stadiums or big venues like The O2 but by the “smaller, often unusual” events taking place in the capital:

“With venues closing, those that are still holding on feel pressure not to programme anything too challenging or unusual; this narrowing of output can only be a bad thing,”

He attributed the closures to finance:  “The problem is that the only thing that would seem to be a cast-iron guarantee of securing these venues is money, and this is the one thing that queer/cabaret/alternative communities has seldom had an excess of.”


Writer and performer Rosie Garland, who also appears in cabaret as Rosie Lugosi the Lesbian Vampire Queen, said: “Some of it is connected to the economic downturn for sure. Fringe venues and fringe events exist on the boundaries. Whatever is liminal is the first to get knocked back when the money runs out. Those of us who live on the edges of things have less money to go out in the evening, which leaves the streets to the suits.”

“It’s never been more important to keep finding new meeting spaces, to keep fundraising, to keep going. Those who say we don’t need spaces to meet and be our different selves have clearly never felt isolated. Those who say that we’re all safe in mainstream clubs are being suckered in by the assimilationist lie. Those who say the battles have all been won never really had any battles to fight.”

The Queer Alternative (TQA) is a community group that promotes acceptance, visibility and equality for queer people within goth, metal, punk and other alternative subcultures, as well as working to help individuals in those groups find a place within the mainstream LGBT+ community. Writer and founding member KG Orphanides attributes the loss of venues to large companies and development firms but also feels “a war of attrition is being waged against those parts and people of London that are different and distinctive”.

Orphanides’s words echo Irwin’s: “We need to support the venues we still have. For us as a group, that means taking advantage of those that provide venue hire for events of the kind we put on, which puts business their way. As individuals, we need to support venues and promoters: go out to events, spend money over the bar. It's a sad truth that no matter how fantastic a venue or event is, if it doesn't get enough people through the door and money across the bar, it won't survive.”

The battle between well-financed property developers, and the limited funds of the smaller independent businesses that own the venues for cabaret and queer culture is a refrain echoing through the experiences of all the prominent members of the different scenes. Losing such places is extremely short-termist. “The vibrant city culture that the residents were attracted to in the first place (presumably) is being whittled away,” says Rosie Garland.

But if there is one thing the queer community knows, it’s how to adapt and survive. Even before decriminalisation, queer communities congregated and grew — unity and cooperation have always been key. This month, the popular queer pub and cabaret space, the Black Cap in Camden, was saved by the council from being converted into flats. Meanwhile, London has seen the opening of another queer/cabaret venue by drag icon Jonny Woo in the form of The Glory, Dalston. Along with the Save Soho campaign attempting to protect the loss of more threatened venues, there is still hope for growth. “It is a struggle,” says Orphanides. But it's not unsurmountable.

By Shehzad Raj — editor of London cocktail blog Highball Hoodoo, and working on a PhD in Psychoanalysis.