9 Reasons Why Dippy The Diplodocus Had To Go

The Natural History Museum sparked controversy in 2015 when it announced plans to remove its diplodocus skeleton from the main entrance hall. The departing sauropod was replaced by the skeleton of a blue whale, pendant from the ceiling, in 2017. For many, the diplodocus, known as Dippy, was the symbol of the museum. Almost 30,000 people signed a petition to reverse the decision. We're not among them, and can think of five good reasons (and four rather silly ones) why the dinosaur had to go.

1. It's a fake. Dippy is not made of bone, or fossilised bone, or any other kind of bone. It was entirely constructed by human hand. The skeleton is plaster-cast, not ancient past, and is based on an original held in Pennsylvania. In fact, Dippy is one of 10 facsimiles lurking in museums around the world. Our dinosaur is not just a fake, but an abounding fake; a glorified garden gnome.

2. Dinosaurs buggered off a very long time ago. The blue whale is still around, and classified as endangered. Putting the cetacean at the centre of the hall reinforces the message that the Natural History Museum isn't just about history, it also plays an important role in safeguarding the future of life on Earth. All hail the whale.

3. Ejecting Dippy and hanging his/her replacement from the ceiling had freed up floor space. This can only help with crowd management at one of London's most popular attractions. It also increases the available space for corporate functions, an important source of funding for the museum. That might not be the most romantic reason for ditching Dippy, but more income helps the museum stay free to casual visitors. (It should be noted that the museum hasn't given this as a reason; we're speculating, but it makes sense.) 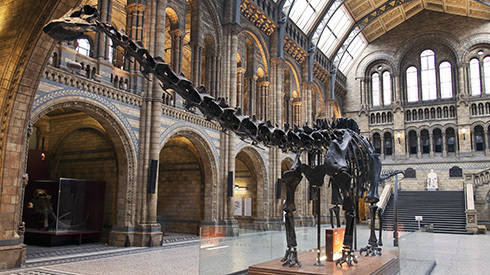 4. Dippy hasn't be binned, just moved elsewhere. The fake skeleton is touring the country, giving even more people the chance to view the replicated remains.

5. The dinosaur galleries are easily the most crowded in the entire museum. By removing their skeletal herald from the main hall, presumably fewer people flock to this wing. Instead, more visitors can be directed to the Large Mammals Hall, where they can see an incredible full-size sculpture of a blue whale.

6. The 'skeleton' first arrived at the museum in 1905, but has only stood in the main hall since 1979. The revered tradition of displaying the beast so prominently dates only as far back as Sophie Ellis-Bextor.

7. London now has a flying whale! One bowl of petunias later, and Douglas Adams has a temple.

8. The whole farrago has raised awareness of the 1975 film One of Our Dinosaurs is Missing — a curious Disney flick that combines a stolen sauropod, London car chases and casual racism. Watch out for the scene on Bankside, where one of the Barbican towers obtrudes upon the skyline, despite the film being set in the 1920s.

9. According to the influential documentary Star Trek IV: The Voyage Home, we mess with the whales at our peril. Wipe out the creatures, and we risk a visit from a vast ocean-boiling space probe that can communicate only through jarring 1980s synth chords. Let us learn from those events, and put the whale at the centre of the museum.

See also: Our previous bout of iconoclasm: six reasons NOT to rebuild the Euston Arch.