Still looking for that perfect Secret Santa gift? Here's what Londoners of yesteryear were buying for each other, from health hazards to rubble.

Put the 'activity' back into 'radioactivity'

What do you buy the lady who has everything? How about this specially packaged sample of radium, the radioactive element that may have killed Marie Curie? 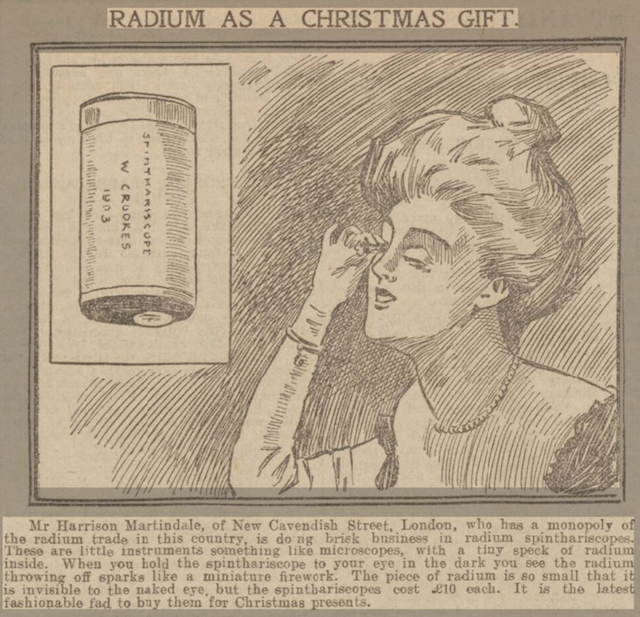 This scintillating gift could be yours for just £10 on application to Mr Harrison Martindale of New Cavendish Street, London, as this advert from 1903 attests.

The "spinthariscope"contains a tiny crumb of radium, whose radioactive decay causes flashes of light on specially coated zinc sulfide screen. By holding the tube up to her eye, the atrociously sketched woman in the advert is able to see evidence of individual atoms decaying.

Spinthariscopes were popular curiosities in the first decade of the 20th century, and more sophisticated versions are still available today. They're perfectly harmless, unless you were to break open the tube and start dicking around with the radium.

War for all the family

Despite the horrors overseas, Christmas in 1915 still saw Londoners flocking to the shops for gifts. Decidedly military gifts. Clothing wise, camouflaged collars and handkerchiefs were the best-selling items: you can have it in any colour, so long as it's khaki.

For the lady, "a tea caddy in the shape of a gun shell" would have helped take the mind off things. Toy soldiers and fun-sized artillery pieces were popular with children, and the more graphic the better: "Field guns which... can fire pieces of wood and other 'ammunition'... toys for the representation of the transport of wounded soldiers are also to be found... others — and very realistic these are — are in trenches or lying prone behind boulders".

Meccano was another hit with the kids, but even this neutral plaything could be turned to martial instruction: "[the child] is delighted when he can play at field operations and construct what is required for the movement of troops or even for fortifying them... It is possible to construct the hull of a ship and mount guns upon it, to make torpedo boats and even submarines... cranes for the transport of war stores." Total war in miniature.

This exceptionally oddball advert comes from 1922. It was the most surreal Christmas on record. Housewives were snapping up cans of Vim polish in the hope of invoking some kind of cross-dressing troglodyte in a stupid hat, who would then share his giant cracker full of diverse kitchen items. That's our understanding, anyway.

Just like today, the Edwardian press would run seasonal gift guides with tips on where to pick up a bargain. A 1908 feature in the Manchester Courier describes a Christmas shopping trip to London. Among the recommendations we're urged to "Drop a note to Messrs Elkington, Regent Street, and ask them to send their booklet on the Swastika jewellery."

Back in the day, of course, the Swastika was a popular motif — "the oldest symbol of good luck in the world," as our correspondent puts it. Alas, not so lucky for anyone who spent a tidy penny on the jewellery, which for obvious reasons would become unwearable a generation later. Further 'how times have changed' material comes later in the article, when we're told that the "Felt covered toys of the Golliwog order are funnier than ever".

Have yourself a creepy, tight-fisted Christmas

"Heeeeeere's Johnny!" This sinister advert from 1933 was surely an early influence on Jack Nicholson's performance in The Shining. It's not clear whether the inscrutable lady is Roger's wife, mother or henchperson, but she's certainly laying on an all-expenses-spared Christmas for the fellow. The munificent gift of a single battery will give Roger many hours of pleasure listening to the wireless. Then, once its power is spent, he can devote many more hours to pondering how a company  "as British as the BBC" can employ such a Teutonic font.

Get your finest rubble here

Q. What was the most prized Christmas gift of the war?
A. Bits of rubble from the Houses of Parliament.

Many stores, big and small, were doing a roaring trade in this "Westminster souvenir stone", mostly salvaged from the bombed out House of Commons. The stone was hewn into a rich variety of forms, including ash trays, book ends, model buses, Big Ben, British bulldogs and "busts of diverse celebrities from Edward the Confessor to the Prime Minister". The souvenirs were sanctioned, stamped and numbered by the authorities, and sales (from a guinea to £2,000) raised money for the Red Cross and St John War Organisation. So if you've inherited, say, a peculiar stone likeness of Winston Churchill, check the bottom and see if it's part of the old House of Commons (and let us know!).