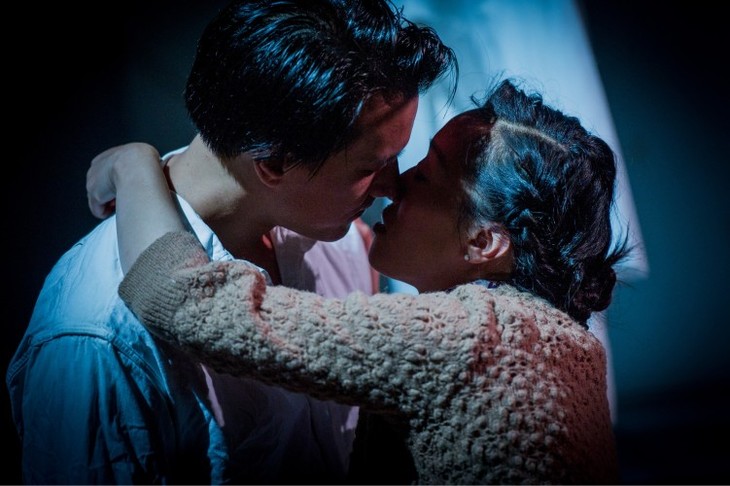 The Last Days of Limehouse, previewed earlier in the week, is now in full swing amid the atmospheric decay of Limehouse Town Hall. It is not the first time we've attended a play about Limehouse Chinatown in this venue. Four years ago Kandinsky’s Limehouse Nights was set among the opium and cocaine scandals of the early 20th century. Now long-standing British East Asian company, Yellow Earth, brings a different perspective to bear on lost Chinese Limehouse.

The building is a perfect representation of Yellow Earth’s production, which delves among the ruins of bombed, post-war Limehouse seeking the semi-mythical streets of Chinatown. The Town Hall seems to have been gently falling apart since the abolition of Limehouse District, more than a century ago. Its downward trajectory matches that of the first Chinatown, formed by sailors who settled where their ships put in, next door to the West India Docks. The area attracted hostility and fascination in equal measure, becoming an international byword in film and fiction for Eastern mystery and the depravity of opium smoking. Racism, fear and global politics mingled with a Western obsession with the exotic, creating everything from Fu Manchu to Limehouse Chinese Laundry Blues.

From the heights of international notoriety in the early 20th century, Chinatown descended into oblivion with remarkable speed. The buildings of Chinatown were cleared by the mid-60s and its people departed. Only a few Chinese street names — Amoy Place, Canton Street, Ming Street — hint at a lost existence. And of course, the real place was nothing like the deranged fictionalised version. Yellow Earth choose to focus, admirably, on showing us the real Chinatown. Jeremy Tiang’s play is set in 1959, as the London County Council moves in to clear the dilapidated streets around Limehouse Causeway and build the modernist blocks that occupy the area today.

The concept is fascinating — essential but strangely obscure London history. However, there are problems with the execution. The central character, Eileen Cunningham, was born in Limehouse but raised in New York. She tries to persuade the remaining Chinese inhabitants to fight to preserve the area. The indifference and then hostility she meets seem unsurprising from a character who patronises and insults at every turn. The core argument of the play is change and progress v. identity and heritage, crucial to understanding 20th century development but easy to parody. Here the theme is overworked in successive scenes that repeat rather than develop ideas.

Last Days of Limehouse is also a promenade production. Asking your audience to stand for 90 minutes and to watch the action through a sea of people demands something in return. Unfortunately, the rationale for performing on the move never becomes clear, and the suspicion grows that a conventional staging would have been just as effective and rather more enjoyable.

But there is plenty to enjoy in Yellow Earth’s show. The character of a former merchant seaman, haunted by dreams of his ship being bombed by the Germans, highlights the remarkable contribution to the Second World War effort by thousands of Chinese sailors who never received any recognition. Gabby Wong stands out as the beleaguered owner of the Friendly Noodle café, struggling with the need to move on without forgetting her Limehouse origins. And the Limehouse Chinatown Rediscovered research project, online and on show in the foyer, is an excellent and comprehensive source of information about an area of London that has never quite thrown off its cloak of mystery.