God, Demons And Physical Theatre At The Tricycle 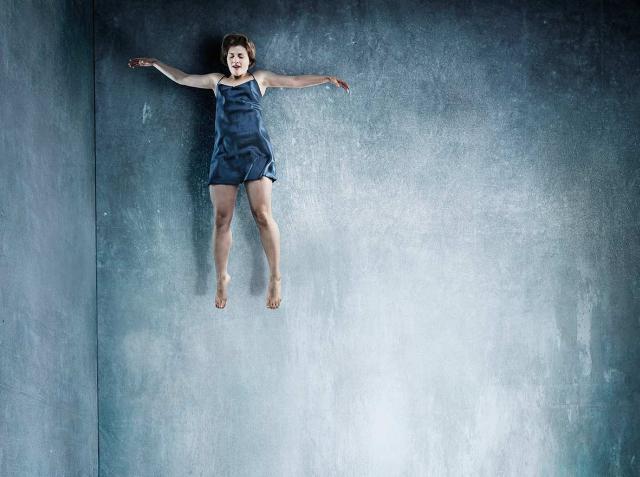 Something unthinkable has happened. We know this from the opening moments of Bryony Lavery’s The Believers, as two couples tear each other apart dissecting their guilt, picking at imagined lies and questioning everything. The terrible thing involves two young girls — the two couple’s daughters — and the play rewinds to shows us in excruciating detail exactly what went wrong. But why is belief — in God, in demons, in other people and in each other — so important to comprehending a terrible night?

Worldly couple Marianne (Eileen Walsh) and Joff (Christopher Colquhoun) have been flooded out and forced to stay the night with the neighbours, evangelical Christians Ollie (Richard Mylan) and Maud (Penny Layden). While their daughters, Grace and err… Joyous, play upstairs a very awkward dinner party ensues. Lavery’s dinner dialogue is funny and full of social faux pas, as Marianne and Joff snigger through grace, swear compulsively and Ollie and Maud face up to their  hostile neighbours (“Anti-Negativity Armour… on!” “Weapons of love and peace… loaded!”). Then it is the Christians who break out the weed, talk about their open relationship and come on to their guests. As memories become hazy, one character gains belief and another loses it, before chicken-killing and possession take over.

Bryony Lavery has collaborated many times with Frantic Assembly and director Scott Graham, and the company’s signature physical style frames the play, literally. A steel box, rolled in slow motion around the stage, creates exteriors and contains characters. Neon boxes, tilted at expressionist angles, fill the darkness and, as everyone’s world’s are turned upside down the characters and then the set starts to lean, actors suspended on wires until scenes are played on the vertical back wall as though seen from above. These scenes, reminiscent of Vesturport’s famous production of Metamorphosis at the Lyric Hammersmith, are visually stunning and the hovering, slow motion actors seem plucked from classic poltergeist photos. At its climax the play swirls with unsettling sounds, and demonic images glimpsed in the dark. Jon Bausor’s design, defaulting to darkness, is the star.

Frantic Assembly ensures The Believers is never less than entertaining and it is energetically performed and imaginatively staged. As an investigation of belief though, it struggles to escape its contrived situations and characters. The two pairs of neighbours are amusing, but seem to belong to a sitcom. The unforgivable act at the centre of the play seems to defy explanation which renders all belief systems, whether organised or not, equally irrelevant. We are left with a powerful sense of something dark and beyond our control, waiting to overwhelm us, but The Believers chooses Exorcist horror over coherent argument.