Every now and again in a writers' room somewhere in the US, a plan is hatched. Why not send the characters on a trip? Get them out of their comfort zones? And it turns out that one of the most popular destinations for American sitcoms is London — though not all of them actually have the budget to visit. We've identified eight comedies that have crossed the pond, and what they showed of us to the folks back home.

Warning: some spoilers ahead.

Parks and Rec began its sixth and most recent season with a double episode in London. In the show, it's because Leslie (Amy Poehler) won an award; in real life, it's because Chris Pratt was shooting Guardians of the Galaxy here. So Leslie, Ben, April, Andy and Ron decamped to London, saw Buckingham Palace (which Andy thinks is Hogwarts) and met Peter Serafinowicz. Despite UK viewers still being stuck on series three. Sort it out, BBC4. While we wait for a legal way to watch the show, you can at least see one of the magnificent Swansonisms prompted by our fair city. And we'll ignore the fact that when the writers wanted to send Leslie and Ben somewhere romantic for the 100th episode, they went to Paris. Damnit (Jerry).

All the Friends (bar Lisa Kudrow, too pregnant to travel) came to London to film Ross's wedding to Emily. It's pretty cringeworthy if you're a Brit; apart from a pre-House Hugh Laurie getting annoyed at Rachel on a plane, and pre-Rushmore/Sixth Sense Olivia Williams as the bridesmaid Joey seduces, it's all a bit... stereotypical. Richard Branson as a hat seller? Jennifer Saunders chewing the scenery? Sarah bloody Ferguson? Yep, they got Fergie. (We're willing to bet there are a fair number of you reading this who have no idea who Fergie is.) It's a depressing thought, but this is doubtless how a lot of tourists see us.

Yeah, we'd never heard of this either, but it's a cop parody show that airs on cable channel Adult Swim — and has Doctor Who's Karen Gillan as a current cast member. A recent episode saw the San Diego cops go to 'Little Britain', actually filmed in London, with guest stars Anthony Head, Julian Barratt, Colin Salmon, Kelly Brook, Peter Serafinowicz again and a special appearance by the Dean Swift pub. You can watch the whole thing online. It's bizarrely brilliant.

Episode: Season 8, "Love is in the Airplane"

London is an incidental element in an episode set mainly on a plane, a plot device to reunite Grace with her ex-husband and have her end up pregnant. But they land at Heathrow, where Will displays a knowledge of British West End theatre beyond the obligatory Lloyd Webber:

WILL: OK. Nine hours until Billy Elliot. That gives us eight hours to sleep, and one hour to find a Burger King.
GRACE: [POINTING] There it is.
WILL: Perfect. 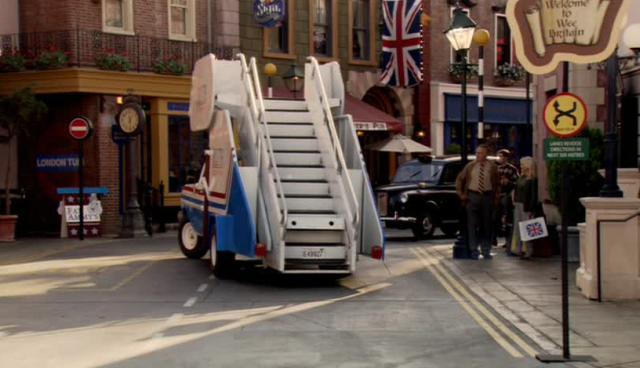 Is this cheating? If Will and Grace barely made it past immigration, we'll count AD's Wee Britain. It's the same idea (but about eight years earlier) as NTSF:SD:SUV — a suburb of an American city given over to Britain — except Arrested Development built it on a studio lot. While it's more generic British than specifically London, there are black cabs, a Big Bus Company London bus, Leicester Square sign and the "London tube". Shame they couldn't find any British actors in Hollywood, casting Charlize Theron (South African) and Dave Thomas (Canadian).

Chap of the Manor is a British version of Family Guy, with Neville and Lydia, kids Collingsworth, British Meg, white trash Stewie and horse Brian, attempting to steal DNA from the Queen. While it's set in "Billingsbury" rather than London, the accents are all Dick van Dyke Cockney, the title sequence is the Houses of Parliament and Joe goes to the pub dressed as a Queen's Guard. At least they got some fine local actors in, including Tom Hollander, Chris O'Dowd*, Ioan Gruffudd and John Finnemore. Plus, the cricket match commentary section accurately sums up how Londonist feels about the sport. Thanks, America.

Mary Poppins's floating over the Thames greeted the Simpsons' arrival into London on holiday, as did actual Tony Blair — taking time out in April 2003 from his busy schedule of invading Iraq to record a quick few lines. Tourist sites spotted include St Paul's, the Royal Albert Hall, Harrods, Big Ben, Carnaby Street, the London Eye and Buckingham Palace. We must take issue with the number 15 bus going to "Aldwych station" via South Ken and Hyde Park, though. 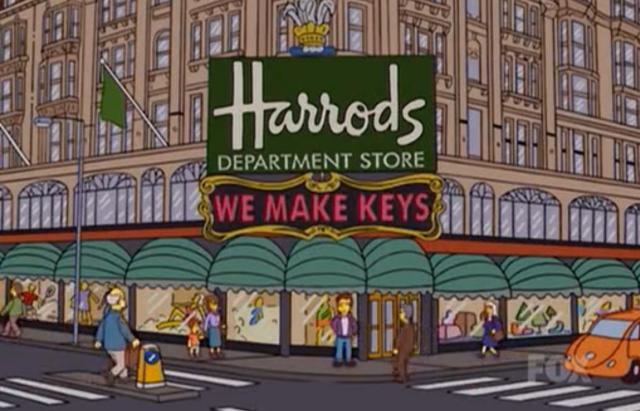 Boy, it's cheap to go on location when you're animating. The season four episode called Pip was a retelling of Great Expectations, but with robot monkeys and a machine-regenerated Miss Havisham. Everyone apparently hated it.

If we've learned anything from this — and it's not certain that we have — it's that American TV has a very definite image of us, which primarily consists of Houses of Parliament (spotted five times), Buckingham Palace/Royalty (four times), the Tower of London (three times), London Eye (twice) and Peter Serafinowicz (also twice). Congratulations Peter, you'll be on a postcard any day now.

* We know Chris O'Dowd is Irish. But Cate Blanchett plays the Queen, so he's more local than her.