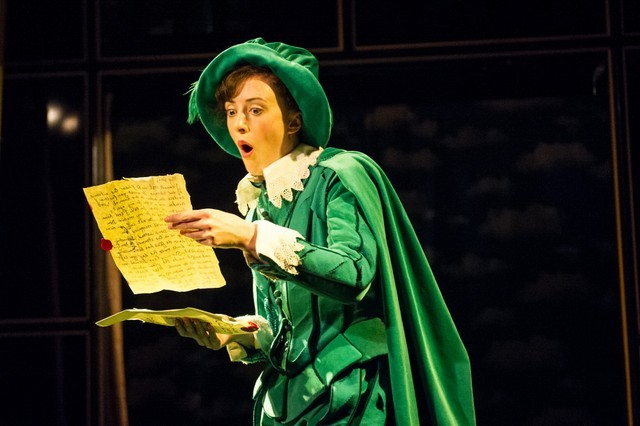 The Arcola’s rare revival of Don Gil of the Green Breeches is a farce, and a very complicated one at that. Tirso de Molina, leading light of the Spanish Golden Age of drama, which flowered in the early 1600s, was an insanely prolific playwright with a caustic view of humankind, for a monk. He is best known for creating Don Juan, but the story of Don Gil revolves around a female protagonist, Donna Juana.

From the very first scene, when Donna Juana steps on stage dressed as a boy, in green from head to foot, and spins a very long and complex tale about what she is doing there, the audience knows the genre. This is mistaken-identity, role-reversal, gender-swapping, bed-hopping, triple-take, urban-revenge farce. Donna Juana (Hedydd Dylan) is in Madrid, masquerading as Don Gil, to take revenge on the man who led her up the garden path, Don Martin. He is after Don Ines and her money, and he is also impersonating Don Gil, but Donna Ines and her cousin Donna Clara fall for the girl-boy Don Gil, who is also pretending to be a woman called Donna Elvira. Then a monk gets involved and Donna Juana starts pretending to be dead. His/her servant is thoroughly confused.

This is all good fun, and tricky to stage, but director and cast do a good job. In particular, Katie Lightfoot as Donna Ines delivers a manic, disconnected poshness that is very funny and all too believable. The go-to joke throughout is the incredibly complex plot explanation, which leaves both audience and characters flailing in the wake of unexpected layers of new complication. At one stage there are four people at once dressed in green, impersonating Don Gil. However, intriguing character development also lurks amid all the rushing around. Donna Juana starts to behave like her male equivalent, toying all too easily with the affections of the women who fall for her and becoming the thing she set out to revenge. The gender swapping also leads to general sauciness and gets the women as interested in each other as in the men. As Tirso de Molina says, in Sean O’Brien’s sharp new translation, “Love is a dealer, and the heart is the trading floor.”

Don Gil of the Green Breeches is one of a season of three Spanish Golden Age dramas at the Arcola, which has come straight from the Theatre Royal, Bath. The Arcola’s Mehmet Ergen directs Don Gil and Laurence Boswell, principle champion of Golden Age plays in Britain, directs the others. Don Gil, if it sometimes threatens to self-combust under its various conceits, is packed with entertainment. The remainder of the season, Punishment Without Revenge and A Lady of Little Sense, both by Lope de Vega, has tragedy and comedy to offer in equal measure. The Arcola is doing an important service by staging rarely performed drama, and this is opportunity not to be missed.