Scott Of The Antarctic, Rick Astley And A Cheese Slice

By Tom Bolton Last edited 107 months ago
Tom Bolton Scott Of The Antarctic, Rick Astley And A Cheese Slice 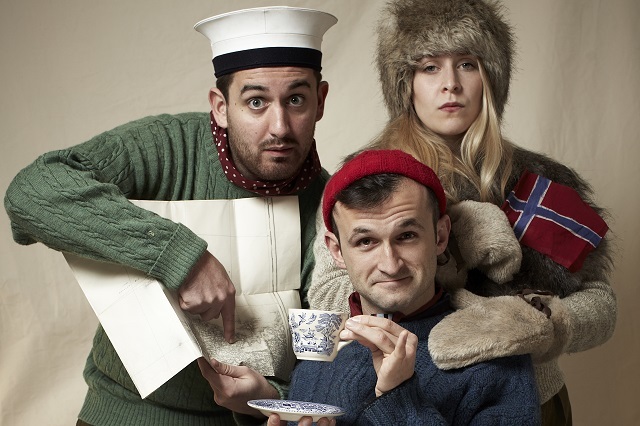 Captain Scott’s doomed expedition to reach the South Pole is the classic story of heroic British endeavour, pig-headedness, self-sacrifice, and of course glorious failure. It has everything… except humour. So who on earth would have the cheek to make it not only funny, but spectacularly, wilfully silly? It turns out that the people in question are a new theatre company called tinder, who whose first production, The Last March, is an unlikely Christmas show at the Southwark Playhouse.

Based in Portsmouth and run by Ian Nicholson, tinder’s ethos is low tech theatre that lays the processes of theatre bare. This translates into a fringey delight, exactly the kind of production that would storm Edinburgh. Scott’s expedition is retold with lashings of tea, japery and home-made effects. On paper this sounds like too-predictable humour, but tinder push the envelope as far as they possibly can. No joke is too good to repeat, usually again and again until it descends into surreal chaos. Nor is there any moment that cannot be improved with inspired stupidity. The exit of Captain Oates, a seminal moment in British culture, involves Never Gonna Give You Up by Rick Astley. The death of Scott is complicated by the involvement of a Norwegian cheese slice. These jokes are built up with an involved internal logic that makes them hilarious, rather than gratuitous.

This type of apparently casual theatre is anything but, and relies on the quality and precision of the performers. Samuel Dent, as Scott, has stepped out of Armstrong and Miller’s RAF Pilots sketch to great effect. Sam Gibbs plays all four of Scott’s companions, each with his own unique manner and accessories. This becomes awkward when they are all required on stage in very rapid succession, which is often the case. Gibbs's physical comedy is excellent. When not pretending to leave the room behind a stack of crates via a series of stairs, ladders, lifts and slides, he can be found attempting to make tea with an incurable case of the shivers, extracting every drop of clowning potential.

Pernilla Holland is a Real Norwegian. She therefore plays not only Amundsen, who speaks very fierce Norwegian that no-one seems to be able to translate, but also all the bad weather – rushing about doing a lot of puffing and with fake snow. In the course of this she somehow manages to steal the show, delivering ridiculous scenes with complete seriousness, and enthusiastically demonstrating Norwegian cultural highlights.

The Last March is fringe in length as well as style, finished inside an hour, but tinder pack the production with gags, frolics and general entertainment. It is good to see the techniques of the alternative, physical theatre scene adopted for purely comic purposes. If this show is anything to go by, tinder will become much better known very quickly. In the meantime they offer the perfect riposte to heavy-handed Christmas pantomime humour with something guaranteed to make the grumpiest theatre-goer giggle.