Londoners don't often make train journeys for fun. But the capital and its surrounding counties are home to a few oddball rides that might just warrant a special trip. Here's our compilation of 10 train journeys that might have escaped you.

Back in 2011, the Independent published a piece on the little-known 11.36 from Paddington to Gerrards Cross. 'Ghost' (or 'parliamentary') trains, said Michael Williams, “wend their eerie way around Britain's rail network, almost unknown to the public and running mostly empty.” See our video of that particular ghost train. Ghost trains exist because it's cheaper to keep the route open than it is to shut it down. There are a number of ghost services in London, including the 09.03 from London Cannon Street to Beckenham Junction, and the 06.18 from Battersea to Highbury & Islington. Another from Wandsworth Road to Olympia seems to have been withdrawn recently.Those expecting to be greeted by a headless conductor will be sorely disappointed, though. Nearly all ghost train routes also depart from, and arrive into, London's stations regularly as non-direct services. Boo. Ian Visits has an excellent account of a ride on the Wandsworth-Olympia route.

Gatwick's driverless Monorail (here's a shaky video) shuttles passengers between the North and South terminals with an average journey time of two to three minutes. The experience might be akin to a lackadaisical DLR but, for many, it's the first and/or last train journey they'll make while in London (or, technically, just south of London). 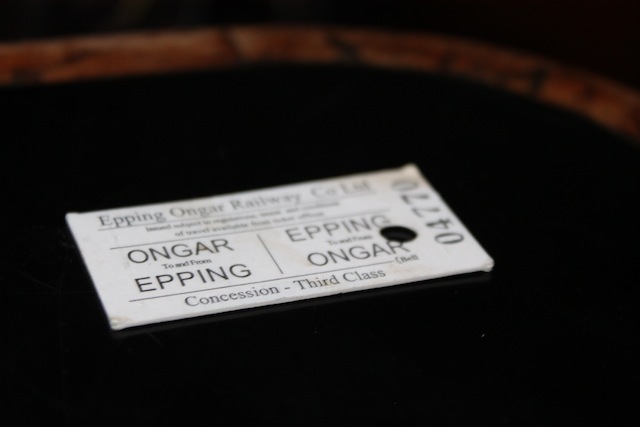 In an age when the network is expanding via Crossrail and Northern Line extension, it's easy to forget that some strands of the network have shrunk. Take the Central Line. Until 1994, the easternmost station was Ongar, not Epping. Today, a heritage line has taken over the route. Board a steam train from Ongar station (which currently features a hulking ruin of an old steam engine track-side) to North Weald, a diesel from North Weald to Coopersale, and complete the journey to Epping on a vintage Routemaster or Greenline. Oyster cards very much not accepted.

When's the last time you purchased a £1 train fare? That's how much it costs to ride the Brockwell Park Miniature Railway, although admittedly it only takes you from one bit of the park to another, slightly different, bit of the park. Still, an array of engines are used, and kids will adore it. Brockwell Park Miniature Railway reopens in March 2014.

It sounds like an underachieving cousin of the London Eye; in fact the London Millennium Funicular is little more than a glorified lift. Situated at the north end of the Millennium Bridge, it provides easy access from Paul's Walk up to Peter's Hill (an epic journey of 26.85 metres). Because the lift runs on an inclined track, it can officially call itself a funicular. Come on, we had to get this list up to 10...

“Is it a train? Is it a Tube? Is it a bus? Yes!” These were the immortal words from the 1991 advert featuring Supercar, a gimmick dreamed up to sell the One Day Travelcard. The wonderful thing about Supercar is that it's real, and has recently been restored. Though Supercar runs on tarmac, not tracks, it has a hybrid chassis concocted of one third train, one third Tube and one third bus. By genetic makeup, then, we reckon it constitutes a train. Supercar makes occasional cameos at events throughout London, so keep your peepers peeled.

The irony of the Transport Museum's Tube simulator is that you'll spend more time waiting to get on this than you ever will an actual Tube. That it has levers and buttons you can get your grubby mitts on, means there's invariably a queue of transport nuts gasping to have a go. Your reward is a rather brilliant driver's eye-view. Or sit up front on the DLR for a similar experience.

For decades, the London Post Office Railway or 'Mail Rail' was a salacious word on the lips of secret London fanatics. The narrow-gauge driverless train plied its own underground Paddington-Whitechapel route between 1927 and 2003, carting piles of letters and parcels. In 2011, a group of urban explorers managed to break in and take snaps of the Mail Rail, showing it to be in fine fettle. Today, you can ride the Mail Rail at the Postal Museum.

We took a ride on Mail Rail — see the video.

What could make the world's largest curated collection of living plants any more remarkable? How about a bunch of ersatz train carriages yanked from greenhouse to greenhouse by a modified Ford Transit van? All jibes aside, the Kew Explorer is a useful aide to weary parents with kids who've seen one-too-many herbaceous borders. Plus the accompanying commentary will help you gen up on all things plant-like. Herbaceous borders, for instance.

During the 1930s, serious plans were afoot to extend the Northern Line, making use of existing steam routes and also creating fresh tracks, tunnels and stations. Unfortunately the advent of World War II forced the Northern Heights project to be halted, and come the mid 1940s it was scrapped altogether. The legacy of the Northern Heights – Parkland Walk, connecting Finsbury Park to Highgate with a dog-leg up to Alexandra Palace – is a fascinating, sometimes eerie woodland corridor, replete with weed-choked platforms and bridges passing over nothing in particular. It's the kind of place you expect to glimpse an actual ghost train.