The future Queen Elizabeth II and her younger sister were escorted from Buckingham Palace by Lady Helen Grantham (a lady-in-waiting) and their governess Miss Crawford to their local tube station, St James's Park. The pair were dressed in green coats and dark green tam o'shanter hats — perhaps a nod to the District Line's own livery.

On reaching the station the royals "began the thrilling business of getting twopenny tickets out of the automatic machine," a manoeuvre accomplished by the young Princess Margaret. Press reports suggest that the ticket inspector in the station was one of the few people to recognise the pair over their ensuing journey. There is no mention of any formal welcome, even though the station sits beneath London Underground's headquarters at 55 Broadway.

Incredibly, the party then boarded a third-class smoking carriage, maintaining their anonymity. According to the Aberdeen Journal, "The Princesses looked eagerly out of the window and were as excited as any other little girl when the train rattled along through the tunnel." Perhaps because of their lowly choice of carriage, the incognito royalty went undetected by fellow passengers.

They alighted at Charing Cross (now Embankment) to change onto the Northern Line. Those who've done the same switch might recall the confusing confluence of passageways when changing between the District and the deep-level platforms. Our royal outing was caught out, too, at first taking the wrong stairs, but the resourceful lady-in-waiting got them back on course. Here, the future Queen got her first ride on an escalator. 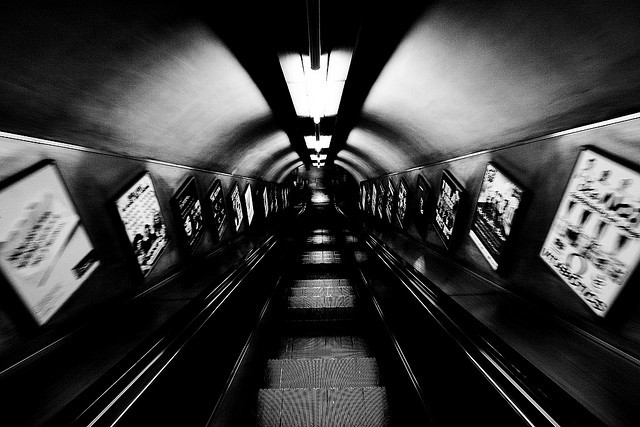 The Northern took them to Tottenham Court Road, where the princesses thrilled at two more escalators back to the surface — one account suggests that they ran up. The party then promenaded along New Oxford Street before turning down a side street towards the YMCA, which can still be found in the area. There they had tea.

Their anonymity was not to last. The princesses were recognised by many on the return journey, taken during rush hour. On the Northern Line, reports The Express, a charlady named Mrs Simmons was pleasantly surprised to awake from a slumber and find the laughing Margaret beside her, and Elizabeth opposite. Mrs S had the good grace to smile and bow to the youngsters.

According to one article, the children almost forgot to hand in their tickets at St James's Park. A ticket inspector ran after them, and the children reportedly apologised for the error. If you ever forget to 'touch out', remember that you're in very august company.

It was a busy week of transport for the duo. Just a few days before, they'd accompanied their mother on a steamer to North Woolwich to inspect the docks. Then, two days later, they were pulled along in a llama-drawn wagon and rode elephants at London Zoo. Following their underground adventure, the princesses supposedly wrote to their parents — the King and Queen, obviously — asking that they might ride on the top deck of a London bus... an ambition we're not sure was ever fulfilled.

This was not the last time that Elizabeth travelled by tube. As Queen, she took to the controls of a new Victoria Line train between Green Park and Oxford Circus, when the line opened in 1969. She also rode the Piccadilly extension, when it opened to Heathrow in 1977. And most recently, Her Majesty boarded a Metropolitan Line train at Baker Street as part of the network's 150th anniversary celebrations.

The ultimate unification of monarch and underground railway came in 2016 when the new Crossrail route was officially named the Elizabeth line.

Pedant's note: If anyone takes umbrage with the title of this article, and wants to point out that she wasn't Queen at the time of her tube ride, we'd like to inform you that you're just splitting heirs.

Sources include the Aberdeen Journal, Daily Express and the Western Morning News, via the British Newspaper Archive.

Middle image: An escalator at Embankment — perhaps the first the future Queen ever rode — by Siddharth Khajuria in the Londonist Flickr pool. Bottom image, TfL. Top image by the author.