This Other London, By John Rogers

By M@ Last edited 110 months ago
M@ This Other London, By John Rogers 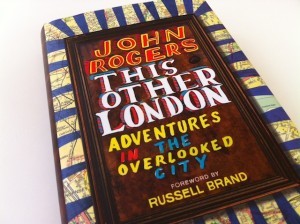 Ever visited Ilford, or Beckton, or Crayford Ness? Ever scaled Uxendon Hill, or knowingly traversed the Falcon Brook valley? John Rogers is our topographical guide to 'this other London', seeking out parts of the capital rarely visited by most of us.

In a series of ten walks, Rogers finds Vietnam in a disused gas works, passes the Titanic's engine room at the foot of Dollis Hill, and reveals a connection between London's largest outdoor pool and the surface of Mars.

Of course, this isn't the first book to find wonders in the capital's outer regions. Indeed, the author's journeys are often informed by maps and walking guides written a century ago. In our own times, similar adventures have been chronicled by Rogers' friend and Resonance FM partner Nick Papadimitriou (in the superb Scarp), and — most famously — Iain Sinclair (London Orbital among other books).

But while Sinclair divides his readers with constant references to obscure artists and film-making chums, Rogers is more likely to name-check Alan Partridge, Led Zeppelin or The Empire Strikes Back. He's the everyman's psychogeographer, hobbling across the hilltops with only a can of Stella and a dodgy knee for company.

The author's love of exploration is infectious. Anyone who reads This Other London will find themselves with an unexpected itch to visit the Welsh Harp Reservoir or Hounslow Heath. At the very least, you'll find yourself varying your walk into work, looking for tell-tale gradients and unusual flora.

An unlikely forward by Russell Brand and a jazzy dust cover by Bob and Roberta Smith add a superstar wrap. But this down-to-earth, booze-hunting 'hippy wizard' is a star in his own right. Brand describes Rogers as 'like Prospero crossed with Mr Chips', and a 'tangle-haired shrub shaman'. We'd rather think of him as the Brian Cox of topology, inspiring wonder and curiosity on esoteric subjects (without using complicated words like topology and esoteric). Buy this book if you have even the merest pebble of interest in your surroundings.

This Other London by John Rogers is out now from HarperCollins.