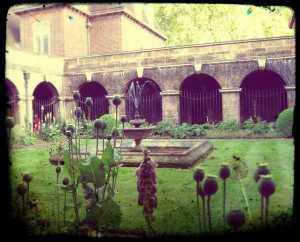 Tourism isn't a modern phenomenon. People have been visiting London from overseas since – well, if we count the Romans, for 2,000 years. Nor are postcards bitching about the weather and stupid local customs a modern invention either. We've dug out some thoughts about London from foreigners paying us a visit before the Great Fire.

Thomas Platter was a Swiss medical student who came to England for a holiday in 1599. We liked him straight away for this astute assessment, predating Samuel Johnson by some 178 years:
"London is the capital of England and so superior to other English towns that London is not said to be in England, but rather England to be in London, for England's most resplendent objects may be seen in and around London."

Thanks, Thomas. He also reveals that some things never change:
"There are a great many inns, taverns and beer-gardens scattered about the city, where much amusement may be had with eating, drinking, fiddling and the rest, as for instance in our hostelry, which was visited by players almost daily. And what is particularly curious is that the women as well as the men, in fact more often than they, will frequent the taverns or ale-houses for enjoyment."

Though we'd be up for reinstating this particular practice:
"It is the custom in ale-houses to erect partitions between the tables so that one table cannot overlook the next."

Whitehall seems to have been rather bucolic in the late 16th century:
"This palace is situated above the bridge on the river Thames, on to which back lovely gardens. Before the entrance to the palace is the tilt-yard, in its centre a barrier about a horse's height on either side of which participants joust. Adjoining this yard is the park where we saw a number of fallow deer, many white ones among them."

Whereas Westminster Abbey was more like a market:
"In the large porch are merchants selling books and linen. In the cloister-garden where the students and clerics dwell, I saw a plantation of vines, the only ones in England, but when I tasted the grapelings which were very early, I thought them rather watery and unfit for making good wine."

He also didn't mind nabbing the odd souvenir:
"Upon the shore [at Deptford], we saw the ship of the English captain Drake in which he is said to have sailed round the world. It appears that it was very large and stoutly built of some hundred tons, quite fitted for so long and perilous a voyage, and since it is rotten with age and now decaying, I took a piece and brought it back with me to Basel."

Horatio Busino was chaplain to the Venetian Ambassador and arrived in London in October 1617. He doesn't seem to have had the best introduction to English society:
"Foreigners are ill regarded not to say detested in London, so sensible people dress in the English fashion, or that of France, which is adopted by nearly the whole court, and thus mishaps are avoided."

Neither was he at all impressed with our ancestors' table manners:
"There are endless inns and eating houses, for board alone or for board and lodging, beer and wine shops, wholesale and retail for every imaginable growth, alicant, canary, muscatels, clarets, Spanish, Rhenish and from hundreds and thousands of other vineyards, all excellent, though one must drink them, forsooth, out of a silver cup, as they are very dear. Thus they hold their very hiccoughs in account, nor is it considered impolite to discharge them in your neighbour's face, provided they be redolent of wine or of choice tobacco."

Speaking of tobacco:
"One of the most notable things I see in this kingdom and which strikes me as really marvellous is the use of the queen's weed, properly called tobacco. It is cut and pounded and subsequently placed in a hollow instrument a span long, called a pipe... Throughout the city pipes and tobacco are sold in most of the shops, so that these with the others where they merely sell ruffs and wristbands, would of themselves form a large city."

He was also a first hand witness to some, er, typical local behaviour at the Lord Mayor's Show:
"We noticed but few coaches and still fewer horsemen; only a few gentlewomen coming in their carriages for a view at some house in the Row belonging to their friends and relations, for the insolence of the mob is extreme. They cling behind the coaches and should the coachman use his whip, they jump down and pelt him with mud. In this way we saw them bedaub the smart livery of one coachman, who was obliged to put up with it. In these great uproars no sword is ever unsheathed, everything ends in kicks, fisty cuffs and muddy faces."

If you want to read more of this pair's experiences, try and get hold of The Journals of Two Travellers in Elizabethan and Early Stuart England: Thomas Platter and Horatio Busino, published by Caliban Books.