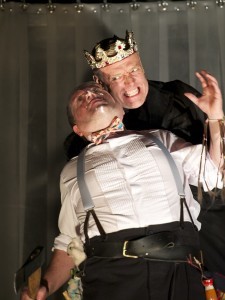 In a parallel world, Edward Hall could be running the Royal Shakespeare Company founded by his father, Sir Peter.  Instead, he walked out of the RSC in 2002, and never looked back.  Founding an all male Shakespeare ensemble Propellor, based for 14 years at the Watermill Theatre in Newbury, he staged a series of thrilling productions, notably the Rose Rage adaptation of the Henry VI plays.

The RSC’s loss is the Hampstead Theatre’s gain.  He has just taken charge of a theatre that lost its considerable mojo when it replaced its tin shed with a shiny new auditorium.  The Hampstead was a famous new writing crucible, and Hall aims to bring back the days when writers such as Friel, Pinter and Leigh made it special.  In the meantime he has a couple of aces up his sleeve with his Propellor productions of Richard III and the Comedy of Errors.

The pairing is ingenious, allowing Hall to play up the grand guignol aspects of Richard III to great effect.  Richard Clothier, a one-armed hunchback in a leg brace, is still the most physically imposing man on the stage as Richard III.  He returns to complete the job he began playing Richard in Rose Rage, ten years ago.

His Richard is suave and aristocratic, cleverly playing down the opening “winter of our discontent” speech as an amused commentary on political shenanigans.  In Brylcreemed blonde hair and Edwardian overcoat, reminiscent both of Edward Fox and Edward VIII, he delivers a mesmerising performance which lurches from urbanity to deranged, blackly comic violence as, amongst other things, he breaks his wife’s neck before biting off her ring finger.

Richard’s England is an abbatoir, complete with scaffolding, slaughter tables and plastic strip curtains.  A chorus of killers in white coats and burn masks lurk on stage and in the audience, armed with rusty shears, sickles, and nasty-looking saws.  During the interval one could be seen threatening Sir Peter Hall in Row G with a pair of pliers.  The sickening funny killings are the play’s heartbeat, as the pile of body bags grows to contain much of the cast.

Debauched Edward IV dies spitting a fountain of blood; Rivers is dispatched with a hammer drill; Buckingham (the diminutive, goateed Chris Myles) is disembowelled; Hastings is carved up with a chainsaw, spraying claret over the plastic curtains.  Clarence - a fine performance from John Dougall - relives his guilty nightmares before he dies at the hands of two capering, bowler-hatted murderers, the first of many characters to reap their just rewards for past sins.  The doomed young princes, very effectively played as puppets, have just enough time to be obnoxious before a silent, Oddjob Tyrrel (with all his lines cut) removes them from the scene.

Edward Hall’s distinctive, physical company delivers a three hour production which flies by.  The all-male casting will not be to everyone’s taste, and seems a perverse approach for a play with three pivotal female roles.  Although the performances are good, the hint of farce that always lurks when men play in drag undermines key scenes with Queen Elizabeth, Lady Anne and Queen Margaret.  Nevertheless, Hall he has a remarkable ability to make Shakespeare seem fresh, a lightness of touch which bodes very well for the future of the Hampstead Theatre.  It’s certainly the place to enjoy the most riotous Shakespeare in town.