From The Royal Observatory: The Greenwich Time Ball

By M@ Last edited 156 months ago
M@ From The Royal Observatory: The Greenwich Time Ball 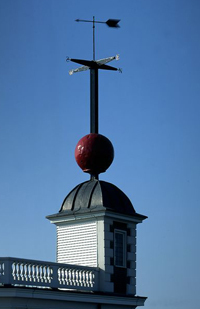 In the first of three posts, we focus on individual exhibits and novelties from the collection of our Museum of the Month - the Royal Observatory, Greenwich.

The Greenwich time ball is perhaps the most viewed object at the observatory. You can see it perched on Flamsteed House without going anywhere near the hilltop complex. Indeed, that's the point. The ball was constructed as an aid to timekeeping for ships on the Thames. Exactly on the hour, as measured by the accurate clocks of the observatory, the ball would be dropped down its support. Ships setting out to sea could then adjust their chronometers to the correct time.

The ball was crafted from metal and wood in 1833 by Maudslay Son & Field. Originally, the ball was winched up and released by a hand. In 1852 the release was automated via an electric impulse from the Shepherd Master Clock. Since the 1950s, the timing has been controlled by a super-accurate clock at the National Physical Laboratory. The ball still drops at precisely 1pm every day.

What the observatory's web site doesn't mention is that the ball contains several dents put there during renovations - the builders assumed the historic ball was for the skip and started playing football with it.