Listen Up Interview: My Tiger My Timing

By Talia Last edited 138 months ago
Talia Listen Up Interview: My Tiger My Timing 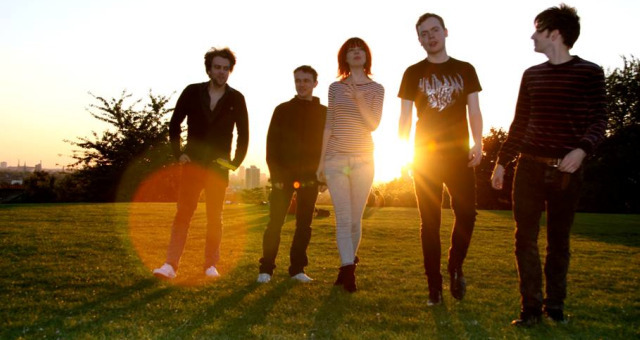 My Tiger My Timing are a five piece band from New Cross that have keeping our iTunes on shuffle for a good couple of months now. With the likes of Hot Chip's Joe Goddard and New Young Pony Club's Andy Spence on board with production duties for their debut album, their gorgeously light electro-pop expertly blends male and female vocals and manages to get right inside your head despite it's cool detachment. Their new single is out on Monday so we had a quick catch up with them last week.

Hello My Tiger My Timing. Who are you and what are you upto?

We're Anna, Gary, James, Jamie and Seb and we're a new band from south east London.  Our second single 'I Am The Sound' comes out on Monday

What's with the name?

We're named after a song by Arthur Russell who was a great musician/songwriter from New York and one of our early influences.  It's a bit nonsensical but sounds sort of determined at the same time.

Whereabouts in London are you based? What's brilliant and what's totally horrible about it?

We're based in New Cross, Peckham and Deptford.  It's full of students, musicians, artists and interesting weirdos so that makes it brilliant but at the same time it's just a big old dirty main road and sometimes you worry about your lungs and the safety of your wallet.

Where are you from originally, what does London do better?

Anna and James are siblings and grew up in New Cross, Jamie is from Crawley, Gary from Accrington and Seb from Torquay - we're spanning the UK.  London is just a great place to be for a band, the city itself is inspiring and there's so much happening, it's fast paced and competitive and keeps you on your toes.

What London location has been the most significant in the lifetime of My Tiger My Timing?

We have spent a lot of time formulating plans and practicing in South London and playing live in East London but arguably the most important place for us has been Andy Spence's studio in North London where we recorded our first two singles.It's got that magic feeling and it's where all our hard work has come together.

We sound like spaced out pop music balancing on the edge of a nervous breakdown buying sweets from the all-night garage.

We love that image! Now, give us your most awesome reason for why we should check you out rather than every other new artist out here?

My Tiger My Timing is the sound of five people who know and love pop music more than anything else deciding to do something great.

The Old Blue Last is a bit of a staple for south London bands as they migrate east, there's always an interesting band or two to watch upstairs and it also has a great jukebox.

Can you think of an unusual London location that would be amazing to do a gig at?

We would have loved to have played at The Astoria before it got knocked down, but in terms of more random locations maybe the bandstand in Greenwich Park, it would be quite old school and we could get everyone to sit in striped deck chairs.

No, but I reckon that could be quite interesting for us, I've never seen a busker using synth before, it would sound great reverberating down the tube.  Or we could go a cappella because all five of us sing.

You must check out Post War Years, Plugs, We Have Band and Django Django.

Go to the top of Telegraph Hill park and watch the sunset over London and then go down the road to the Montague Arms and have a drink with the skeletons and zebras there.

My Tiger My Timing release 'I Am The Sound' via Silver Music Machine / Pure Groove Records on Monday and you can catch them live instore at Pure Groove next Thursday.