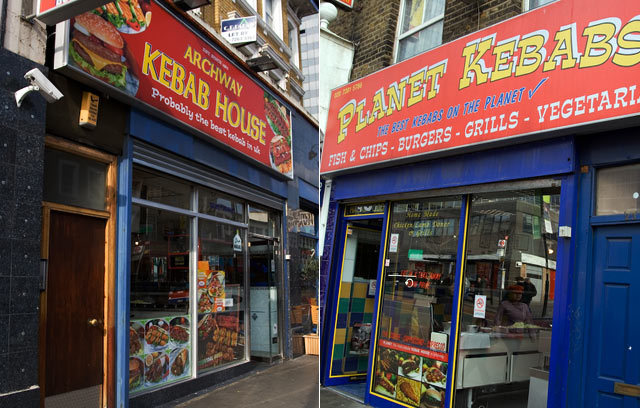 On a staid north London street, a battle rages between two implacable foes to determine the answer to that essential Friday night question: who serves up the finest kebabs in N19?

On one side we have Planet Kebabs, bombastically declaring on the frontage that it offers the "best kebabs on the planet". Directly across Junction Road we descry the more geographically circumspect Archway Kebab House, and its humble though grammatically dubious legend: "Probably the best kebab in UK". But to which of these stalwarts of the shish should you entrust your stomach?

With kebab shops, it's the little differences that matter. The pita bread at Planet Kebabs was suspect, and an unsolicited serving of garlic mayonnaise onto our doner caused a fatal loss of structural cohesion and a fumbled finger-licking attempt to salvage what meat remained. Archway Kebab House, meanwhile, were more judicious with their sauce deployment, and the quality of their hummus and salad combo rated significantly higher than their astral rival.

The winner is... despite there being little to discern between most of London's late-night kebabberies, we'll forgo the Planet for the subtler charms of Archway Kebab House. But really, we're just talking kebabs here, so for a late-night fix it's probably best to go for the one with the shortest queue.