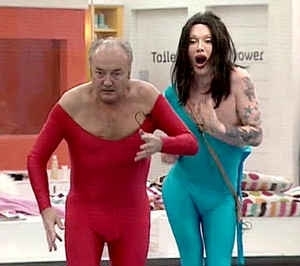 Reality TV: Not quite the white-hot topic it maybe was a few months ago at the height of Shilpagate but still newsworthy, if you're a lazy newspaper editor with a comment space to be filled, anyway. What can there possibly be new to say on the subject? Well, a debate being held next Tuesday (3rd April) in the Southbank Centre aims to explore the shifting interface between "watcher" and "watched" embodied by Big Brother, Celebrity Love Island and, er, House Doctor. This is what the press release has to say:

As part of the 100 Ideas series of events, talks and performances, Southbank Centre presents Reality TV: The New Reality? a debate that tackles the critical issues on a genre that has come to inform many areas of television, popular culture, art and even politics.

The panel includes Jade Goody, George Galloway MP [Shouldn't he be looking after his constituents' interests instead of blathering on about how he was manipulated by the Big Brother producers etc etc, blah blah blah?], Reverend Richard Moy, ITV executive Layla Smith and Big Brother producer Tim Hincks. The session will be chaired by the broadcaster and journalist Matthew Wright.

The event provides the opportunity to discuss in detail the effect of reality TV on society as a whole. The evening will also feature a pitching session, where members of the audience will be able to pitch ideas to Amaze TV for a reality TV show of the future.

On that last point, really, what is there left to pitch? Our most TVGoHome-style outrageous suggestions are probably in pre-production somewhere already. Doubtless the bottom-feeding suckerfish of reality TV - we're looking at you, Calum Best and Rebecca Loos - would be only too thrilled to appear on Celebrity Underwater Colonic Irrigation - Live!, and with 90% of today's teenagers seemingly thinking a career acting out slightly stilted versions of real life on telly beats a McJob hands down (goodness knows they may have a point too) the genre is only going to expand.