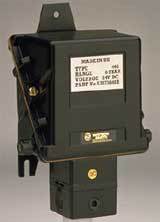 On our way to the Londonist Dungeon this morning, we were unlucky enough to be travelling in the Central Line as it went absolutely tits up. Our friendly and throughly engaged driver told us that the problem was a signal failure at Bethnal Green. Having used the Central Line for nigh on 12 years, we've become used to this kind of bestial shit, but this morning we found ourselves wondering..."What does 'signal failure' actually mean? And why do they happen to the Tube so much?".

It felt time for a little bit of investigation.

Where a Train is delayed, followed by a period of through-running at reduced speed affecting subsequent Trains which is due to a signal, points or track circuit Asset Failure or Defect until such signal is fully restored.

If you peruse the LU website, you'll find the following questions & answers...

How do signals work? And what does it mean when there's a signal failure?

The basic purpose of railway signalling is to keep trains a safe distance apart. Railway lines are divided into sections called blocks and only one train is allowed into one block, protected by a signal at its entrance. Low voltage current is supplied to the running rails, which when short-circuited by the passage of a train’s wheels, operate relays that control signals. The average length of each section on the Underground is about 300 metres. To prevent a train from entering into an occupied section, each signal is provided with a mechanical ‘trainstop’ adjacent to the track. This device will apply the brakes of any train, which attempts to run past a stop signal.

Why are there signal failures on the Tube and what causes them?

There are many reasons why signals fail. However, in many cases, the signalling system itself is working normally, but the equipment has detected a problem with the track. Because signals are designed to ‘fail safe’ whenever a fault occurs, signals turn to red and trains stop running.

As the Tube's signalling system uses small electrical currents in the track to detect the movement of passing trains, signal failures sometimes happen when there is a short circuit between the running rails. These short-circuits may occur after heavy rainfall, when puddles of water build-up on the track - particularly on our open air sections of line. Also, with our high frequency of service, the accumulation of iron filings (from the daily wear and tear of trains) across insulated joints between sections of track may also cause problems. There have even been cases of rodents chewing through cables, turning signals to red!

When disruption occurs, the safety and comfort of our customers is our priority at all times. Our line controllers always ensure that any trains which are stuck in tunnel sections are moved into stations as quickly as possible to let people off.

So according to LU, signal failures are just a natural part of life. Like taxes and awful television on ITV. But according to Ken (via the Beeb ), signal failures have increased by almost half between January and April of this year. In response, Metronet said signal failures on its lines fell 4% over six months and Tube Lines said reliability had improved. But they're clearly talking bollocks aren't they?

This morning our tube system felt like the worst in the world. Or are we being too pessimistic? You tell us.

(p.s. check out this new tube route finder . it's rather neat.)